Main Publications From Jerusalem, to Mecca and Back – The Islamic Consolidation of Jerusalem: Executive Summary 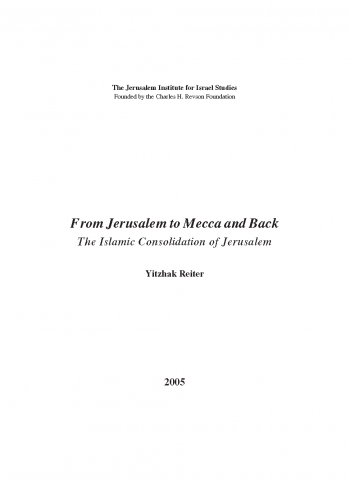 This study addresses the question of whether the issue of Jerusalem and the holy places are an unsolvable component in the Israeli-Palestinian conflict. It also asks: to what extent religious symbols and the religion per se are obstacles hampering the accomplishment of peace. Using 62 academic and semi-academic books published in Arabic in nine countries, most of them from the Middle East, as well as Islamic internet web sites, legal opinions (fatwas) and the press leads to the conclusion that in the last 35 years a new Islamic ethos of Jerusalem was developed in the Muslim World.

The Islamic perspective of Jerusalem

Since 1967, when Israel took over East Jerusalem with its Old City and sacred places, the Islamic perspective of Jerusalem has changed dramatically. A Muslim campaign for liberating Jerusalem from Israeli control was launched in August 1969 following the fire, which was started by an Australian non-Jewish tourist to the structure of the al-Aqsa Mosque. Over the last decade, this campaign has been conducted under the banner “Al-Aqsa is in Danger” with the claim that Jerusalem is “captive” of Jews and therefore Jihad should be carried out to liberate it.

This campaign aims to influence the religious emotions and the political awareness the Arab and Muslim communities in the world and mobilize them for political ends. The campaign, which began in Jerusalem, was disseminated to the heart of the Muslim world, which is symbolized by Mecca, and rebounded back by an echo from “Mecca” influencing the political struggle over Jerusalem in the context of the Israeli-Palestinian conflict.

Is Jerusalem an obstacle to achieving peace?

From the Islamic point of view, there are four main factors: first, the consistent Palestinian position which rejects any attempt to introduce Jewish worship on any inch of the Temple Mount/alAqsa compound; second, the Palestinian-formed message according which Jerusalem belongs to the entire Muslim nation; third, the position expressed by many Islamic religious organizations that there can be no compromise on Jerusalem; and finally, the mis-evaluation of both Israelis and Palestinians of the position of vii the other side, of the supreme esteem the “other” feels toward its sacred places as not only a place of worship but as a central symbol of identity, and of the expectation that the “ other’s real position is more flexible, whereas, in reality, it is not.

Having said this, one should remember that in the precedents of signing peace accords between Israel and Arab entities, there were always Islamic high-ranking religious figures, who have supported political decisions with a theological legal opinion. The author concludes by recommending further investigation in two directions which he sees as a key to resolve the conflict: one, the involvement of a third party in monitoring or controlling the Old City for at least a transitional period; two, the development and public dissemination of texts, traditions and beliefs that give legitimacy to the importance of Jerusalem and its holy places to all three great religions.