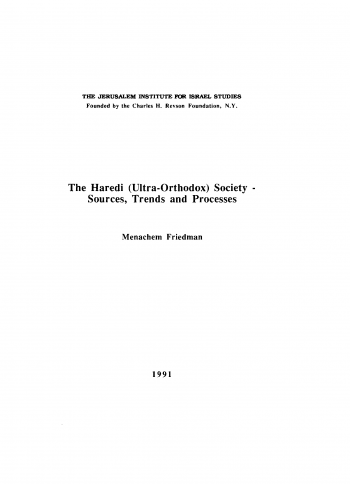 Prof. Friedman’s research presents a comprehensive picture of post-Holocaust ultra-Orthodoxy and its main characteristics, with a historical review of the process of stopping the erosion of secularism and the emergence of its branches and attitudes. The book deals with Agudath Israel and the Holocaust, the old Yishuv and “Neturei Karta”, post-Holocaust changes and the rise of the ‘great ones’ from the 1950s onwards.

A Society of Scholars

Like a phoenix rising from the ashes, the ultra-Orthodox society rose from the ash heaps of the Holocaust of European Jewry. The traditional-religious Jewry of Eastern and Central Europe has vanished from its former abode. It has been replaced by a Haredi Jewry concentrated in Israel and in major Western European and American cities.
What is the secret of this success? What does it mean for those in and outside of the fold? What religious, social, and economic price does it entail?
The geographical and social insularity of Haredi society, and the consequent nearly total cessation of the erosion from its ranks, cannot but create new problems that defy solution. The drift from religion and tradition was also a filtering process that left within the fold only the most suited, those who were prepared to make economic and social sacrifices in order to realize the religious ideals of Haredi society. The impact of this situation is already perceptible in some areas of the Haredi ghetto, which finds it difficult to fulfill its role as an enclave of sanctity amid the secular, hedonistic modern city.
In view of the problems that beset Haredi society, one cannot but ask: is the existence of a society of scholars that requires all its male members to study in yeshivot and to continue studying in kollelim for many years, to the exclusion of general or vocational education, viable in the long term?

The Ultra-Orthodox: Fearing for Their Future: Manager's Brief