The Ultra-Orthodox: Fearing for Their Future: Manager's Brief

Main Publications The Ultra-Orthodox: Fearing for Their Future: Manager’s Brief 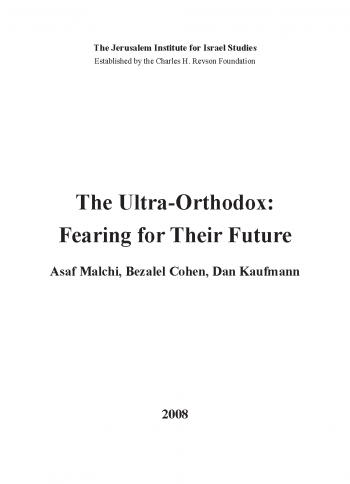 The goal of this research is to examine the attitudes of the ultra-Orthodox toward the pursuit of academic education and to identify the primary obstacles to their integration into different paths of academic study. In the framework of this project, 550 questionnaires were distributed to ultra-Orthodox men and women from all the different ultra-Orthodox communities, with the aim of investigating the level of the participants’ willingness to acquire academic and professional training. In addition, a wide range of obstructions and difficulties that stand in the way of young ultra-Orthodox who are interested in higher education (now offered to them through different frameworks) were characterized and tested. This research was mapped out and studied. The mapping was conducted in the framework of the project “Jerusalem – Regional Innovation Strategy (J-RIS)” whose goal is to locate new forces for growth in Jerusalem, which included the human and economic potential in the ultra-Orthodox sector in the city and its environments.

The findings of the research revealed that more than half of the men who study (approximately 60%) were interested in acquiring an academic education and more than a quarter (28%) would be ready to study in academic frameworks that are not specifically made to the Ultra-Orthodox.

Based on the findings of this research, assistance should be offered in the following ways to young Ultra-Orthodox interested in an academic education: overcoming gaps in knowledge, support and economic aid, information and counseling, and religious and social support.