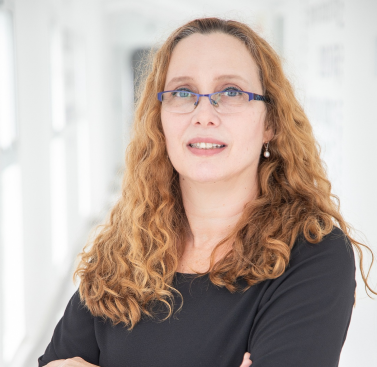 Dr. Hava Erlich, architect and urban planner, joined the Jerusalem Institute for Policy Research in August 2021, as Head of the Planning, Urbanism and Sustainability Team, following a wide-ranging career in Israel’s planning authorities.

Erlich holds a PhD in Urban Planning from the Technion – Israel Institute of Technology, and a master’s degree in Public Administration from Harvard University. After completing her architectural studies, she worked in a number of roles in the public sector, in both local authorities and central government.

In her previous role, she worked as the Head Planner of the Tel Aviv district, for the Ministry of Interior’s Planning Authority, professionally responsible for planning in all the local authorities of the Tel Aviv metropolitan area.

Within this framework, she dealt with advancing and approving major plans in central Israel, such as the master plan for the vacating Sde Dov airfield area, conceptual planning of the Israel Military Industries (Ta’as HaSharon) site, intended for redevelopment after relocation of the facility there. All as part of government efforts to promote the ‘Strategic Plan for Housing’ goals: developing plans for some tens of thousands of apartments, and preparing the necessary statutory infrastructure for the transportation and other types of infrastructure needed for development of residential neighborhoods.

Prior to her role in the Planning Authority, Dr. Erlich worked in local government. Between 2014 and 2019 she was City Engineer and Head of the Local Planning Committee in the municipality of Petach Tikva, Israel’s fifth largest city. Before that, she was Head Engineer in Nof Hagalil (formerly Nazareth Ilit) and the Head Engineer of a large regional committee (formerly “Shomron”, today “Yishuvey Ha’Baron”). In these roles, she was responsible for planning and construction in the towns and cities within the planning area, including a variety of populations: the Arab sector, religious, orthodox and ultra-orthodox, and cities and towns covering a range of socioeconomic levels.

In parallel to her planning activities, Dr. Erlich has been a lecturer and supervisor in several academic institutions. She has published research papers and books in her field of expertise, both for professional-academic peers, and for popular audiences, with the aim of making planning data accessible to all.

And on a personal note, she added:

“I have always felt it a great privilege to serve in high-ranking roles in the public sector. After more than twenty-five years in such roles, I now wish to make more time for research and teaching. I am thrilled and privileged to lead the area of urbanism and sustainability in the Jerusalem Institute for Policy Research.