My neighborhood has a community composter, which I was privileged to help set up and now help operate. It contains five large bins that are estimated to serve a few dozen families. The organic waste consists primarily of water, and the composters help us dispose of this heavy waste in a convenient, sustainable way. As a byproduct we also get organic fertilizer that we scatter in our community garden (except during shmita years, when the land must lie fallow).

In 2020, according to data (Heb.) published by the Central Bureau of Statistics in early October, the City of Jerusalem sent 150,000 tons of organic waste to be recycled. This figure accounts for 28% of all the waste collected in the city (including waste that was not sent for recycling) – the highest rate among Israel’s major cities (those with more than 100,000 residents). In fact, one-third of all the organic waste sent for recycling in Israel came from Jerusalem (whose population accounts for only 10% of the total for Israel).

As noted, organic waste is heavy because it is composed primarily of water. In contrast to the 150,000 tons of organic waste, Jerusalem sent only 56,000 tons of cardboard, pruned foliage, plastic, metal, paper, and glass, combined, for recycling.

In addition to this impressive data, according to Mahapach Yarok (a community organization that promotes composting), Jerusalem has about 2,700 home composters operated by residents in their own yards, and about 100 in public spaces such as community gardens. These composters also recycle large quantities of organic waste, on top of the waste that is sent for recycling. 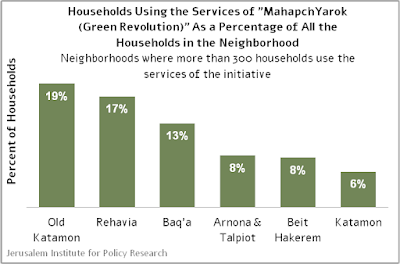 Goodbye Organic Garbage, Hello Compost
By: Lior Regev
What are the solutions to the waste problems in Israel?  Are compost bins a good alternative?  In the small country of Israel, garbage is a big problem.  ...