Among Israeli residents aged 20+ years, 56% moved from one community to another community within Israel, or from overseas. Moving to new community was more common among Jews than among Arabs.

Among Israeli residents aged 20 years or older, 56% moved from one community to another community within Israel, or from overseas (6% of this group moved to Israel from overseas), according to Israel’s Central Bureau of Statistics’ Social Survey, carried out in 2018. Moving to new community was more common among Jews (64%) than among Arabs (18%).
Different areas of the country showed varying proportions of people relocating. I would have thought that the highest movement would have been into the Tel Aviv area, but the Tel Aviv District only came in 3rd place with 68% of the Jewish population having moved there from somewhere else. The locale with the highest number of residents entering the area was Judea and Samaria, with 87% of the Jewish population coming from elsewhere. Coming in second place was central Israel, with 73% new to the area. Jerusalem, in contrast, has pretty stable population, with only 47% of Jewish residents (200,000 in total) newly arriving from outside the city, and 7% of Arab residents (13,000 in total) coming from outside the city.

From where did people moving to localities in the Jerusalem district originate? About one-third (34%) departed from other communities in the area, such as Beit Shemesh, about one-fifth (21%) left Tel Aviv, 13% came from Judea and Samaria and the rest arrived from other places.

And to where were residents of the Jerusalem district heading when they moved? About one-fourth (24%) moved to communities within the area, such as Mevaseret Zion, about one fourth (26%) moved to Judea and Samaria, about one fifth (21%) moved to central Israel and 16% relocated to the Tel Aviv area. 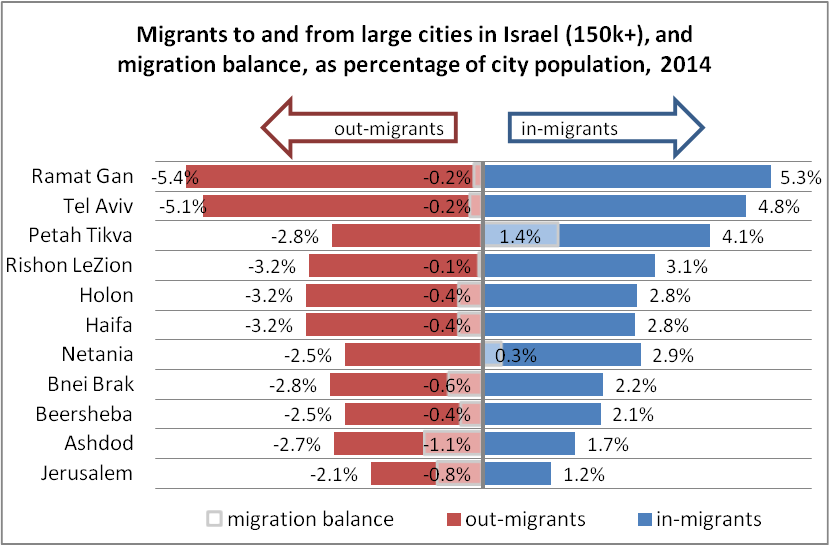 Maintaining a positive migration balance
By: Yair Assaf-Shapira
From our examinations of migration balance statistics from other large Israeli cities, we discovered a trend that might seem obvious: the more construction going on in a city, the more positive (or l...