The first few days of Donald J. Trump’s presidency in the United States triggered widespread protests in different American cities and across the globe, including in Israel. Though a relatively superficial measure, protest attendance could offer a soft analysis of civic engagement. It appears that the populace has been awakened, both abroad and locally, to respond to government policies.

Here in Jerusalem, residents have relatively low belief in their influence on state policies; in response to the Central Bureau of Statistics’ (CBS) 2015 Social Survey in Israel, in response to the question “Can you influence the government’s policies?,” 13 percent of Jerusalem residents with a Bachelor’s degree responded yes to some extent. This is comparable to Israel’s average; 14.4% of Israel’s residents believe they can influence the government’s policies, to some extent. There is not large variation in this metric in regards to education level; 13.6% of those who do not have high-school diplomas in Israel believe they can influence policy; 13.3% of those who do have a high-school diploma; 14.4% of those with a bachelor’s degree; 15.4% of residents with a master’s degree believe they can influence policy.

Another measure of civic engagement is voter turnout.  According to the CBS 2015 Social Survey, the average voter turnout of Israeli citizens increases together with their level of education across Israel and in Jerusalem. Of those citizens without a high school diploma in Israel – 78.6% said that they participated in the most recent elections (held in 2014), while 57.2% voted in Jerusalem. 84.9% of Israeli eligible voters who have high-school diplomas but no further academic education voted in the recent elections, as did 61.7% in Jerusalem.  90.8% of citizens with a Bachelor’s degree voted in Israel at large, compared with 66.9% in Jerusalem. The trend continues for holders of Master’s degrees and Phd degrees; 92.3% of eligible voters with a Master’s degree voted in the recent elections across Israel at large and in Jerusalem. Jerusalem. The total voter turnout in Israel in 2014, according to the Central Elections Committee, was 71.8 %. As is evident in the graph, the less-educated Jerusalemites had relatively lower voter turn-out than their counterparts in other Israeli cities. 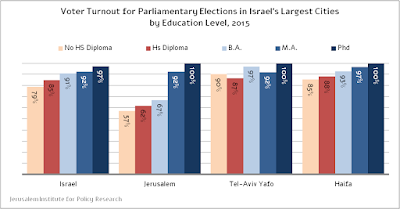