During 2015-2016 (January 2015 through June 2016, a total of 18 months) construction was started on 70,600 housing units in Israel (provisional data, new buildings only).  What housing projects happen in Israel?  Which city has the most construction done? 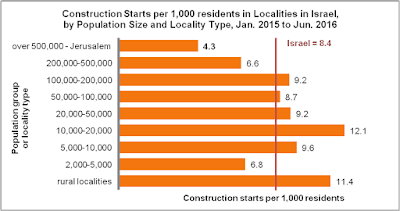 The scope of construction in a particular region or locality reflects a number of factors: policy considerations, such as an interest in directing home-buyers or renters to a certain area; means of development, such as approved building plans; and a demand for housing in that region or locality. It is difficult to separate these factors, but the bottom line is that extensive residential construction will likely contribute to demographic change: more residents will be able to remain in or move to the locality.

Smaller localities saw even more new construction of housing units in relation to their population size. For example, in localities with a population between 10,000 and 20,000 (such as Tirat Karmel, Ariel, Hura, Tel Sheva, and Kafar Manda), 12.1 units were started, and in rural localities (moshavim, kibbutzim, and the like), 11.4 units were started for every 1,000 persons.