Students on the Loose

Main Blog Students on the Loose

Students on the Loose

The new academic year is upon us – how many students study in Jerusalem, and is Jerusalem still attractive to students who are not Jerusalemites? 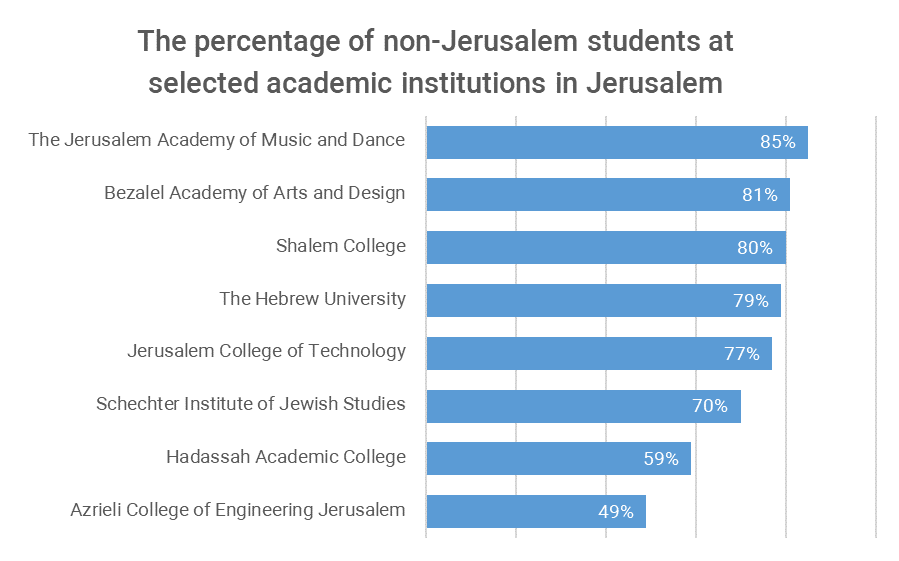 The new academic year opens next week, when tens of thousands of students will be arriving at the gates of academic institutions in Jerusalem and throughout the country.

Of all students studying in the city, a large majority attended Hebrew University (54%), after which about one third attended the city’s academic colleges (34%); the remainder (12%) studied at academic teachers colleges.

Jerusalem attracts students from all over, with many young people throughout the country moving to the city for their academic studies. The data indicates that in the 2019-20 academic year, about 80% of Hebrew University students were non-Jerusalemites (based on where they attended high school), as were 63% of students at Jerusalem’s academic colleges. Among the academic colleges, the Bezalel Academy of Art and Design and the Jerusalem Academy of Music and Dance stand out in the degree to which they draw students who are not from Jerusalem (81%-85%).

Students contribute greatly to the city’s character and development of its culture, urbanism, economy and society. In contrast to other groups in the city, students are not intensive consumers of services; only two services are critical for them – public transportation and the apartment rental market. Beyond these, they are consumers of culture and leisure services and play a great role in the city’s vibrancy – especially in the nightlife districts in the city center and in the adjoining neighborhoods of Nahlaot and Rehavia.

(The data does are not include Open University students, the Jerusalem branch of the Ono Academic College and non-academic institutions in the city). 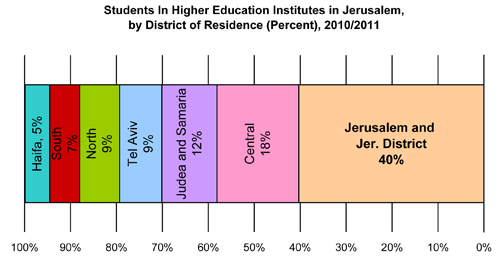 Students and the City
By: Eitan Bluer
The number of students enrolled in institutions for higher education in Jerusalem has been increasing over the years. Bachelor’s degree students who reside in Jerusalem tend towards the humanities mor...

Academic metropolis
By: Yair Assaf-Shapira
Do spatial considerations still play a role when deciding on a place to study and reside during PhD studies? It appears that the answer is positive. ...