The City Planners' Workshop for Shared Spaces in Jerusalem

The City Planners’ Workshop for Shared Spaces in Jerusalem

Jerusalem’s public image in Israel and across the world, as well as in the field of Urban Geography, is that of a divided city, with rigid patterns of differentiation among the populations residing within it, and with especially clear distinctions between the Jews and Palestinians/Arabs who live there. However, during the past decade, and mainly subsequent to the building of the Separation Wall, the economic dependence, the lack of urban infrastructures, and the lack of opportunities have led many residents of East Jerusalem to utilize the infrastructures in West Jerusalem. The increasing presence of residents of East Jerusalem on the west side of the city is apparent in public and commercial spaces, such as work places, medical centers, malls, commercial complexes, and public parks. Thus, unexpected shared meeting spaces for the diverse populations in the city are created. While the fear, suspicion, and lack of trust among the populations may lead to confrontational or even violent encounters in these unplanned meeting spaces, they also provide the opportunity for positive interactions between people, with the potential to question prejudices and stereotypes.
In light of the above, the Jerusalem Institute has chosen to promote the study of shared spaces in Jerusalem. A strengthening of the positive dimensions of the encounters among the populations may prevent deterioration in the level of inter-group hostility, and contribute to a strengthening of the cohesion of the social fabric of the city, as well as encourage the building of a shared society.
Our objective is to create a work and policy tool for the benefit of the decision-makers in Jerusalem, to support the development of shared spaces that create or encourage positive encounters. We hope to initiate a new discourse in the city, one that will transform the complex sensibility of Jerusalem into a sustainable reality that will enable all the communities within it to flourish.

The Jerusalem Institute in collaboration with the Konrad Adenauer Foundation (a Kollek-Adenauer initiative) develops knowledge and skills through a “Shared Spaces” Workshop aimed at professionals, urban planners, and community workers, whose main focus is Jerusalem populations. Topics covered during the workshop will include theoretical subjects as well as case studies concerned with coping with shared spaces in mixed cities in Israel and across the world. 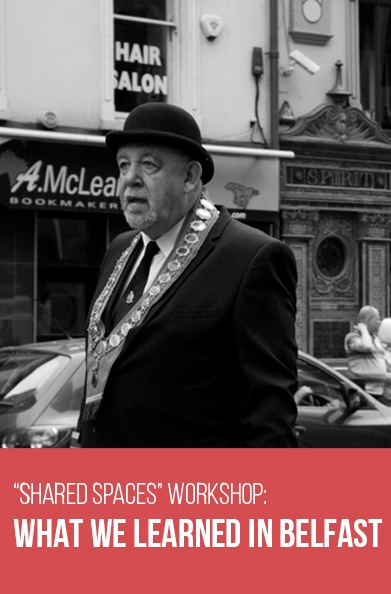 About twenty urban and neighborhood planners from the Jerusalem Municipality participated in the 2018 workshop, and at its conclusion they traveled together on a study tour to Belfast, in Northern Ireland. The guiding question was: How do government authorities, municipalities, and local communities contend with the development of shared public space in a city that is divided by communities in conflict?
Participants in the 2017 study group included Israeli and Palestinian city planners and social activists who were residents of Jerusalem. Workshop content included lectures (in Hebrew) from Professor Menachem Klein about The History of Jewish and Arab Relations in Jerusalem, Professor Daniel Bar-Tal about The Psychological Infrastructure of the Israeli-Palestinian Conflict, Professor Rassem Khamaisi about Urban Planning in Arab Society in Israel, and Professor Frank Gaffikin from Belfast on Developing Shared Spaces in Northern Ireland.
Summary of the tour to Belfast, Northern Ireland, 2018