Altering the Water Balance as a Means to Addressing the Problems of the Dead Sea: Executive Summary

Main Publications Altering the Water Balance as a Means to Addressing the Problems of the Dead Sea: Executive Summary 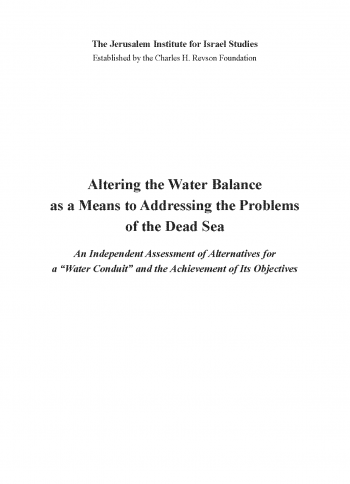 Following the construction of regional and local freshwater supply systems upstream, together with the creation of manmade industrial evaporation basins, a negative water balance within the Dead Sea has been created, which takes the form of a continuously declining sea level and shrinking surface area of the sea.

This is an executive summary of a study that examines a representative sample of alternatives for the construction of a water conduit that would convey water from either the Red Sea or the Mediterranean Sea to the Dead Sea. The study focuses on conceptually defining the alternatives and on refining the economic formula for comparative analyses. The context for this work is solely Israeli – although naturally undertaken with awareness of international needs and constraints.

The analysis of the characteristics of each alternative presented here is intended to provide a foundation for comparative economic analysis and is based on the unique features of each individual route and on an identical set of engineering components and operation whose costs are estimated using standardized assumed values for similar components in Israel. For each of the alternative routes that appear in this document, two basic conveyance options are examined.

The additional investment required for water storage and electricity generation during peak hours was assessed and measured against the present value received from sale of electricity during peak hours, paid during the seventh year of the project and calculated for the beginning of the first year of the project’s implementation, at a discounted rate of 7%. According to this assessment the rates of return vary between pairs of alternatives by 33% to 68%. In other words, the additional investment, under the above conditions, is not profitable.

The estimated indirect cost (increase in cost of the product) inherited in the scenarios that would affect the chemical industries at the Dead Sea can not be accurately determined. This cost depends, among other factors, on the amount of water flow. The assumption for the purposes of our study is that the indirect costs would be negligible for a small flow of water. However, it could reach approximately $1,150 million (in present value adjusted to the first year of the project’s implementation) in the event that the conveyance of seawater and its byproducts is of a volume that leads to the formation of a full and permanent stratification of the body of water in the Dead Sea.