Main Publications Israel and the Palestinians: Some Legal Issues 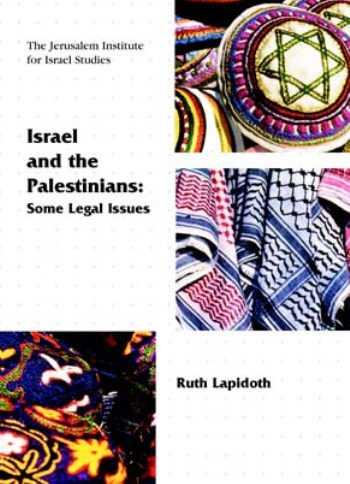 In this work there will be an attempt to examine the legal aspects of some of the historical events related to the conflict. Adding to that an analysis of the Oslo process that started in 1993 and an examination of the main subjects that have to be tackled in the negotiations on the permanent status of the Palestinian areas. It is not intended to present in this article the attitude and positions of the Government of Israel, but to analyze the outstanding issues.

A Legal Analysis of a Political Conflict

Until September 2000 hopes were high that soon an agreement on the final status of the West Bank and Gaza would pave the way for peaceful coexistence between Israel and the Palestinians. These hopes have unfortunately been shattered. As these lines are being written (April 2001), Palestinians are violently attacking Israelis in the West Bank and Gaza as well as in Israel proper provoking violent reactions by Israel. One could wonder what is the purpose in analyzing legal issues related to a peaceful settlement when violence is the order of the day. If we nevertheless examine some of the legal issues, it is because we have not yet lost the hope that sooner or later the guns will be silenced and the parties will return to the negotiating table.

The underlying conflict is mainly of a political nature. However, for several reasons it should be analyzed also from a legal perspective. First, some of the questions involved are overwhelmingly of a legal nature. Second, the parties base their claims on legal arguments. And, third, if and when a compromise is reached, it will be drafted in legal terms and be included in a legal text.