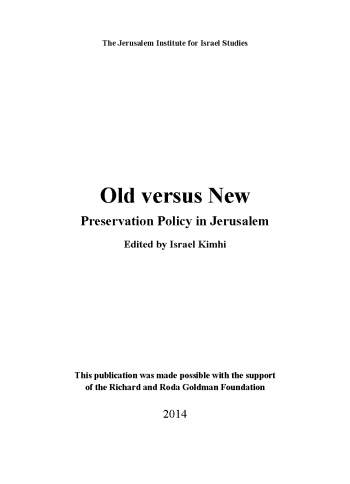 This report is the product of a collective endeavor by a small group of professionals in the field of urban preservation. The report presented here contains the forward and the summary of the first chapter from the full publication. The full text in Hebrew comprises nine chapters: an overview of preservation in the city, the designation “historic city” and its significance, criteria for the selection of sites and neighborhoods for preservation, economic aspects of urban preservation – international and Israeli experience, planning tools and financial incentives for preservation measures in the city, the main problems in Jerusalem and the actual state of affairs vis-à-vis preservation, urban policy recommendations.

This report is the product of a collective endeavor by a small group of professionals in the field of urban preservation. The initiative was launched at the Jerusalem Institute for Israel Studies (JIIS) in 2007, after many observers determined that preservation efforts in the city had slackened. In response, JIIS approached the Goldman Foundation through its representative in Jerusalem, Bonnie Boxer, to seek assistance in the preparation of a report on preservation policy for Jerusalem, and the Foundation responded affirmatively. We take this opportunity to express our gratitude for their support.