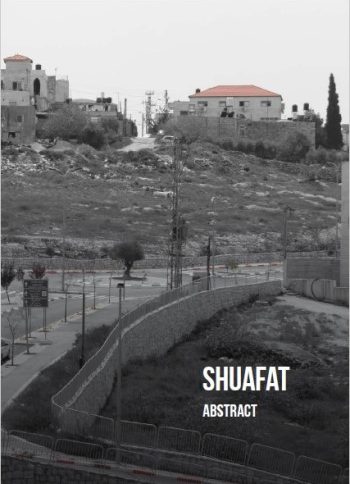 The Shuafat neighborhood is located in North Jerusalem, on the hilly ridge between Givat Hamivtar and  ivat Shapira (The French Hill) in the south and Beit Hanina in the north. The area of the neighborhood is  1,400 dunam and about 22,000 people live there, most of whom do not belong to the six major clans that established the neighborhood.

Parts of the neighborhood are covered by the Master Plan or by current city building plans but not all. Zoning plans based on updated ownership following a process of parcellation are in the preliminary stages, pending approval, but the percentage of building rights that has been approved is relatively low.
The neighborhood lacks public services especially open, green, public spaces, sports fields, and children’s playgrounds.

There are no severe infrastructure problems in the neighborhood, however at the same time: A relatively large number of internal streets lack asphalt surfaces that conform to required standards; there is a lack of  curbstones and of sidewalks; In the older sections of the neighborhood the street lighting is insufficient; Some of the internal roads lack a decent drainage system and there are floods in winter.

This abstract is part of a series of research papers prepared by the Jerusalem Institute for Policy Research about the Arab neighborhoods in East Jerusalem. The purpose of this study is to sketch a social profile,  as well as a profile of the infrastructure in the neighborhoods in a variety of areas, so as to promote active,  knowledge-based steps, toward the improvement of the quality of life of the Arab residents of East  Jerusalem. Beyond describing the current situation, this study attempts to identify mechanisms of growth  and development that will help to advance the socio-economic position of the neighborhoods and villages.  We believe that research that integrates practice with policy recommendations is the basis for the  correction of social and political injustices, in an attempt to create a high-functioning city that is concerned with the wellbeing of all its inhabitants. The research methods include field work, in-depth interviews,  consultation of data bases belonging to the local authorities and research institutes, and round table  discussions in which participants include representatives from the neighborhoods, the municipality, and civil society.

Get the full list of challenges and recommendations in the Abstract file.

Jerusalem: Facts and Trends 2020 - At a Glimpse