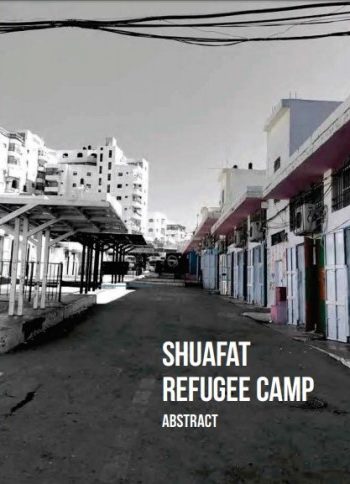 The neighborhood known as the Shuafat Refugee Camp is one of the two largest Arab neighborhoods in North Jerusalem, located beyond the security  fence, with approximately 60,000 residents. The other neighborhood is Kufr Aqab.

The ongoing neglect of the two neighborhoods beyond the security fence and the size of the populations that reside within them have led various  politicians in Israel to suggest removing them from the jurisdiction of the Jerusalem Municipality, based on demographic considerations and concerns about the image of the city. The Shuafat Refugee Camp is the only refugee camp located within the borders of Israel. The camp was established in  1965 and, in 1967, 3,400 people were living there. The camp is administered by the United Nations Relief and Works Agency for Palestine Refugees in the Near  East (UNRWA), which provides it with educational and sanitation services.

It should be noted that the Shuafat Refugee Camp is similar in population size to the cities of Ramle, Lod, Nazareth and Ra’anana while it is more highly populated and crowded than cities such as Givatayim and Hod Hasharon. In terms of the scope of the population, it holds more people than the most highly- populated neighborhood in West Jerusalem – the Ramot neighborhood. However, in comparison to Ramot and the cities mentioned above, the Shuafat  Refugee Camp receives a tiny budget and its municipal services are meager and inadequate.