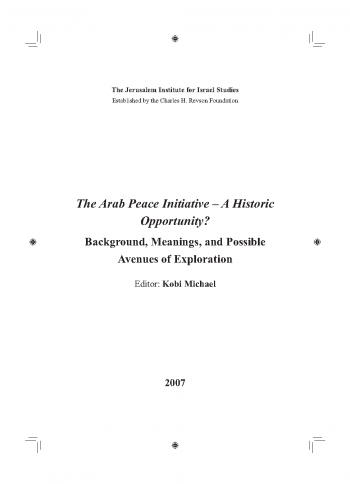 “On June 4, 2007 the Jerusalem Institute for Israel Studies held a conference dedicated to elucidating the background to the Arab Peace Initiative, its textual, historical and political meanings and, in particular, its ramifications for the major players in the region. The many positive reactions generated by the conference led to the decision to publish this book, which contains seven brief essays penned by the conference participants.”

The Possibility of Recognition of Israel as a State

At the Riyadh Summit of March 2007, the Arab League affirmed the initiative originally published at the Beirut Summit of March 2002. This resolution is a potentially momentous one for the ongoing Israeli-Palestinian and Israeli-Syrian conflicts; should the Arab Peace Initiative be adopted by all parties as a basis for negotiations, it may represent a positive turning point.

Those in favor of the Initiative regard it as a major breakthrough, one that presents Israel with a unique, and perhaps one-time opportunity to break out of the current impasse on the Palestinian and Syrian fronts. It also offers Israel the possibility of recognition [as a state and] as a legitimate political entity by the Arab counties of the Middle East – a strategic goal that Israel has been trying to achieve since its founding. Others see the Arab Peace Initiative as an ambiguous document, one that makes the “compensation” desired by Israel (normalization and recognition as a legitimate entity by the Arab countries) conditional on Israel’s acceptance of its stipulations as a final outcome even before the negotiations have begun – a potential trap in which Israel would bear sole responsibility.