The Eroding Status-Quo: Power Struggles on the Temple Mount 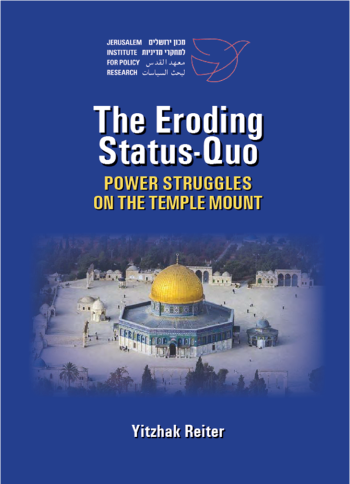 This study aims to lay the foundation for a well thought-out Israeli policy regarding the TM/HS and to present alternative approaches to the authorities responsible for this sensitive site, until a long-term solution to the dispute is found. In order to achieve this goal this study offers an overview of the current situation, which is viewed as the “status-quo” at the TM/HS, as well as the dynamics underpinning the changes that have taken place from June 1967 to September 1996. The understandings that have been reached will be analyzed, as will the accepted arrangements and subsequent disputes over day-to-day administration between Israel and the Muslim Waqf that administers the compound.

Understanding all Sides of a Holy Site

In September 2015, on the eve of Rosh Hashanah, young Muslims had barricaded themselves inside Al-Aqsa Mosque and stockpiled stones, with the intent of disrupting visitation of Jews to the site. It was clear, in light of the upcoming holidays, that more Jews would be allowed to visit the Temple Mount than usual — a situation that the barricaded youth were determined to prevent. In their view, they were defending the pre-2000 status-quo at the holy compound and preventing its division between Muslims and Jews.

The events of September 2015 are only one link in the chain of events surrounding the Temple Mount/Al-Haram al-Sharif (TM/HS) in recent years and eroded what had been the accepted status-quo. The conduct of each of the parties to the conflict reflects a lack of understanding regarding the essential meaning of status-quo at the TM/HS and of its  inherent advantages. In addition, it undermines understandings reached earlier between Israel and Jordan regarding the TM/HS, to the point of posing a threat to strategic relations between the two states.

Furthermore, the understandings and status-quo arrangements regarding the TM/HS reached after June 1967 were never recorded in writing, according to former David District Commander of the Israeli Police, then Chief Superintendent Niso Shaham, who had previously headed the police unit responsible for holy sites. Shaham stated that Attorney General Elyakim Rubinstein considered putting the details of the status-quo in writing while he was Attorney General (1997 to 2004), but was persuaded not to do so.

A special effort is made in this study to understand the Arab/Muslim/Palestinian position regarding all aspects of the dynamics at this holy site in recent years. The study takes this approach because the Israeli leadership and public seem to be driven by national and identity-based motives with respect to the Temple Mount, without considering how these are perceived by the other side, and without taking into account the price Israel is paying and might continue to pay in the future as a consequence of erosion of the status-quo at the TM/HS.

The Historic Basin of Jerusalem – Problems and Possible Solutions