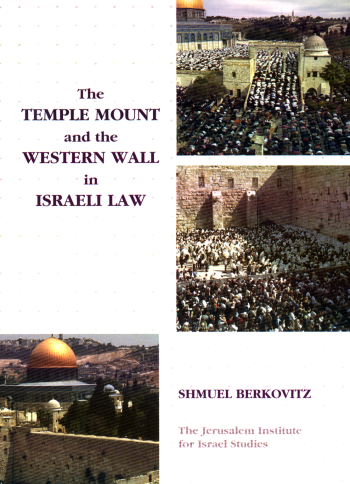 The Status of the Temple Mount and the Western Wall

The Holy Places in Eretz Israel in general, and the Temple Mount and the Western Wall in particular, have an important status in Israeli law. These places are granted protection by special laws; different actions in them are stipulated upon receiving permits from government ministers; conflicts over them may be non-justiciable by lack of jurisdiction; some acts carried out in them are criminal offenses; more severe punishment may be meted for criminal offenses in Holy Places than for such offenses elsewhere; the Holy Places are exempt from various taxes.

This special status is the result of the history of the problem of the Holy Places: conflicts over rights in them among the three great religions (or among the Christian denominations), and of the international political implications to almost every event occurring in them — especially in places holy to more than one religion, as the Temple Mount.

In the author’s opinion, as this is a religious term, a place should be defined as a Holy Place only when it is regarded as such by the relevant religion. Considering the great importance of the status of Holy Places in Israeli law, it would be appropriate to limit the use of the term only to a living Holy Place, i.e. to a place used today for religious worship by the relevant religion.

The Eroding Status-Quo: Power Struggles on the Temple Mount

The Historic Basin of Jerusalem – Problems and Possible Solutions