The Palestinian Petition to the United Nations for Recognition of a Palestinian State: A Legal/Political Analysis

Main Publications The Palestinian Petition to the United Nations for Recognition of a Palestinian State: A Legal/Political Analysis 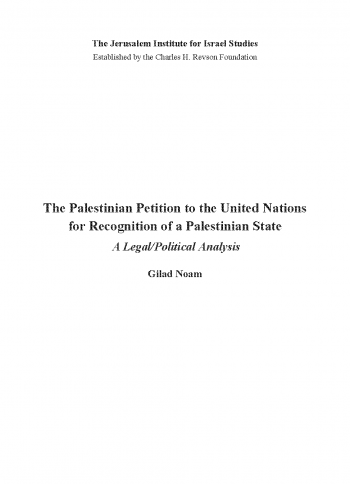 The Palestinian petition to the United Nations (UN) is part of a broader Palestinian process aimed at advancing Palestinian interests not by means of negotiations with Israel, but through the use of multi-national political and legal frameworks. The Palestinian process comprises two interrelated elements: the request for recognition of statehood and the demarcation of this state’s borders as the 1949 ceasefire lines (in this context the recognition of East Jerusalem as the capital of the Palestinian state). These two elements have important political and legal implications, which this policy paper analyzes with attention to both long-term and short-term consequences.

This policy paper analyzes the consequences that would follow from recognition of Palestinian statehood, both in terms of the situation “on the ground” and in terms of the future political process and reactions of the international community to Israeli presence in territories beyond the Green Line.  The policy paper explores some of the principal competences granted to states and examines the uses that a Palestinian state could make of these as well as the resulting challenges and opportunities from Israel’s perspective.

A special chapter of the document is devoted to East Jerusalem. The uniqueness of East Jerusalem derives both from its annexation to the State of Israel and from the fact that the issue of Jerusalem incorporates other international interests such as religious interests linked to the sanctity of Jerusalem and its importance to the three monotheistic religions. The policy paper points out that, on the one hand, the Palestinians might conduct an intensive diplomatic and legal struggle against various measures adopted by Israel in implementing its sovereignty over East Jerusalem, a struggle that would be based on the universal rejection of the Israeli annexation of East Jerusalem as illegal.

The Palestinian Petition to the United Nations for Recognition of a Palestinian State: A Legal/Political Analysis