Main Publications The Rise and Fall of Arab Jerusalem 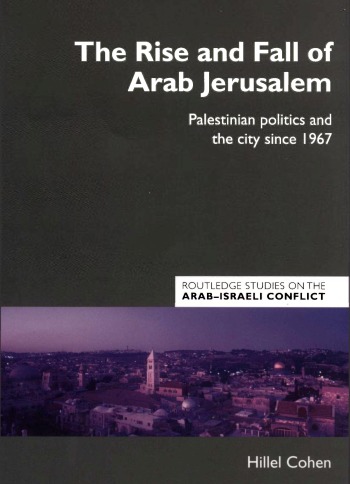 This is the executive summary of “The Rise and Fall of Arab Jerusalem “. This book deals with the Palestinians who live in East Jerusalem and process that this unique population has undergone since the Oslo Agreements and especially since the outbreak of the Al-Aqsa Intifada. It examines the political and the military activities of the Palestinians in the city, their dynamic identities and their relationships with both the Palestinian national movement and the Israeli experience. The book examines the character of the political and social institutions in the city and the population’s involvement in the armed struggle, terrorism and non-violent resistance

This study is based primarily on my personal, intimate knowledge of Jerusalem, my hometown, and on hundreds of meetings and conversations with Palestinians, some I met for the first time while conducting this study, many others I have known for long years. They are from heterogeneous backgrounds and hold a large range of world views: members of the Hamas and those who favor cooperation with Israel; present and former Fateh activists; leftists and rightists; politicians and those who avoid all political activity; members of elite non-governmental organizations and the unemployed and destitute. The fact that, in the midst of the conflict, many Palestinians, including those who belong to radical movements, agreed to speak with Israeli researchers is worthy of mention. The main force motivating them is their desire to present their position to the Israeli public.

Indeed, if there is any change in the political activity regarding Jerusalem, it is not to be found in Palestinian or Israeli political behavior, but rather in the new policy of the Obama administration. The American demand to freeze construction in the settlements including East Jerusalem, and their concern regarding house demolishes in the 1967-annexed areas in Jerusalem have trembled the political arena. The 2010 Israel-US dispute on construction in East Jerusalem was defined by the White House spokesperson to be the deepest crisis between the USA and Israel in two decades.

Selecting the best possible alternative ought to be accomplished according to the ideology of the decision-makers and the potential results. However, Israeli society is characterized by ideological disagreements in all that relates to the conflict with the Palestinians, and the situation is characterized by a profound tension between the national-religious ideology and the potential negative consequences of its implementation. As a result, the ability of the Israeli government to maintain the “expanding status-quo” is limited, and there is a search for a new one.