Main Publications Barriers to Peace in the Israeli-Palestinian Conflict 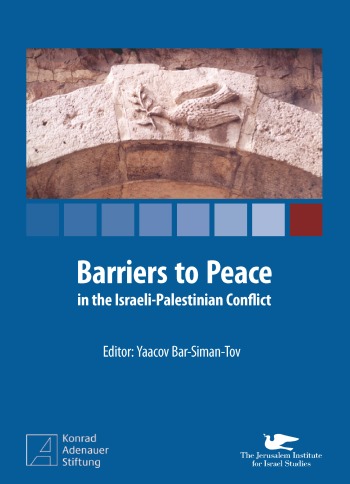 This book presents ground-breaking, original research; it presents the efforts of Israeli researchers, from a large number of disciplines, to re-examine the barriers to the resolution of the Israeli-Palestinian conflict. This volume focuses on the unique characteristics of the conflict that give rise to the unique barriers – structural, strategic, political, psychological, historical, cultural and religious – that prevent or hinder its resolution. The barriers to peace described in this volume are set in the deeper strata of the conflict – national identity, values, belief systems, historical narratives, and collective memory – and they underscore the fundamental differences between the two sides with regard to their understanding of both the conflict, in terms of its characteristics and components, and of the possibilities for its resolution. Although these barriers have been addressed before in academic publications, they have never before been assembled so as to provide a comprehensive picture that reflects the complexity of the Israeli-Palestinian conflict. The novelty of this research volume can be found in its endeavor to suggest ways for overcoming the barriers to the resolution of the Israeli-Palestinian conflict with a view to promoting a settlement.

Compromise on the Core Issues – Positions of Jewish Society within Israel:

In a series of public opinion surveys conducted in Israel, the Institute for National Security Studies found that in 2007, 41% of the Jewish public in Israel opposed any removal of settlements under any circumstances.  Regarding the territorial issue, the survey proposed a compromise according to which Israel would withdraw from most territories of the West Bank, excluding the large settlements (3% of the West Bank), which would be exchanged for territories of the same size in the Gaza Strip.

Compromise on the Core Issues – Findings of a Joint Israeli-Palestinian Survey:

In contrast to the above statistics, drawn from samples that represent the general Palestinian public, an academic study that entailed 719 interviews with Palestinian students in 14 universities in the West Bank and Gaza (in May 2006) found that over 50% of those interviewed absolutely opposed any compromise over the right of return of Palestinian refugees and Palestinian sovereignty over Jerusalem.

The aim of this chapter was to propose a new conceptual framework for analyzing public opposition to compromise on the core issues of the IsraeliPalestinian conflict. This framework proposed distinguishing between two types of opposition to compromise, each resulting from a different perception of the core issues of the conflict.