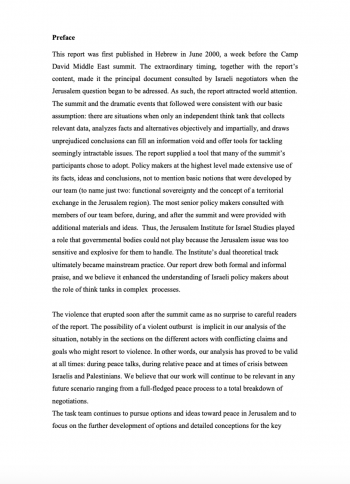 “This report was first published in Hebrew in June 2000, a week before the Camp David Middle East summit. It became the principal document consulted by Israeli negotiators when the Jerusalem question began to be addressed. The report supplied a tool that policymakers made extensive use of its facts, ideas and conclusions, to name just two: functional sovereignty and the concept of a territorial exchange in the Jerusalem region. The goal is to continues pursuing for options and ideas toward peace in Jerusalem and to focus on the further development of options and detailed conceptions for the key issues.”

Following the signing of the Oslo accords, the Jerusalem Institute for Israel Studies took a decision to support the peace process and the thrust toward normalization by enlisting the leading experts in the field to draw up proposals and ideas for resolving the Jerusalem question within the framework of permanent agreements. Even at that early stage it was clear to us that the Jerusalem question would be placed on the agenda despite the broad inclination to ignore it and leave it for the future owing to its high sensitivity and the tendency in Israel to accuse anyone who addresses it of undermining one of the few points of national consensus in the country – “unified Jerusalem under complete Israeli sovereignty for all time.”

The Institute formed a team of senior experts representing a range of fields and organized an ongoing brainstorming session highlighted by marathon discussions. Researchers were asked to prepare background papers to which the Task Force responded. Over the years this method produced about 40 published papers and another 20 that were unpublished but furthered the work of the Task Force. The discussions were based on mutual persuasion – no votes were held. Although the individual members of the Task Force espoused different viewpoints, their work reflected a purely professional approach and the disagreements that arose in the discussions were ultimately resolved.