What can we learn from the large cities’ age structure? 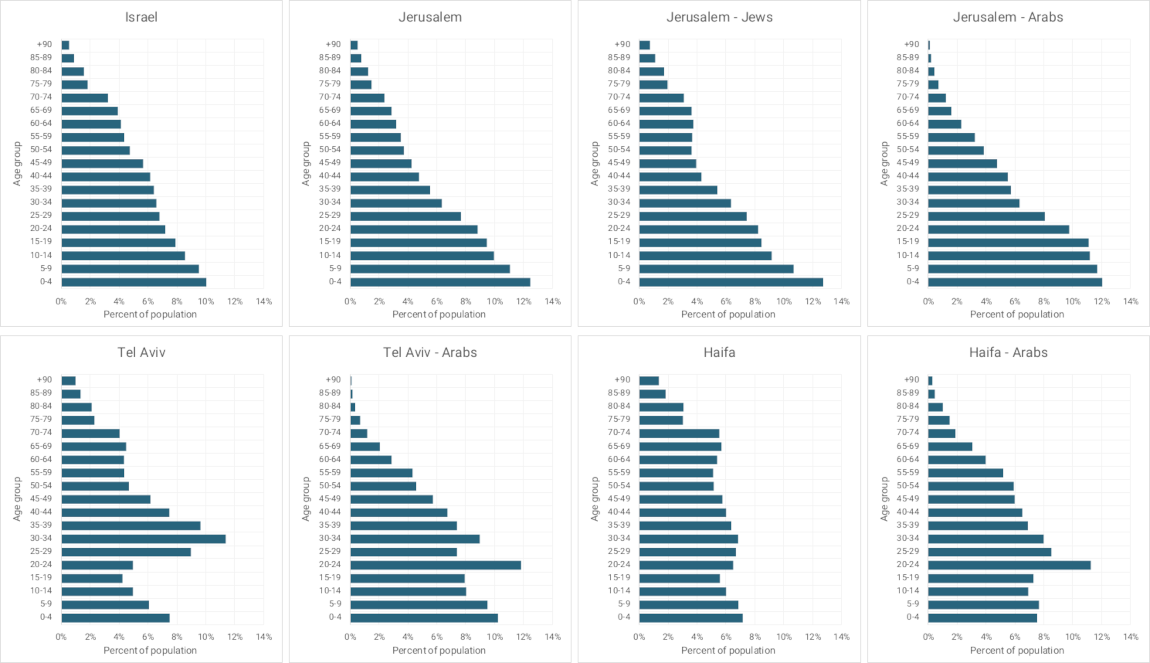 One of the sources for learning about a population is its age structure – how many residents are there in each age group. Large groups of children, other dominant age groups, graded or sharp difference between adjacent age groups – all of these are clues to demographic characteristics such as immigration, birth rate, and even education. The ages are usually studied using a chart known as the “age pyramid”. We looked at some pyramids (actually “half pyramids”) from the data for the end of 2019, which will be published in the statistical yearbook of Jerusalem, on the upcoming Jerusalem Day.

Haifa’s population is relatively old. People aged 70-74 are a dominant age group in the city, and constitute 5.5% of the population, compared with 3.2% in Israel as a whole, and 2.4% in Jerusalem. In Tel Aviv, the dominant age group is 30-34, who constitute 11% of the city’s population. The percentage of children in Tel Aviv (7.5%) is relatively low, but is on the rise. Both in Haifa and in Tel Aviv, the population of the “baby boom” that characterized the country’s first years can be seen in the age pyramid. This is evident in the large difference between the 70-74 group and the 75-79 group.

It is interesting to see that among the Arab populations living in both Tel Aviv and Haifa, the dominant age group is 20-24, which constitute 12% and 11% of the Arab population in each of the respective cities. It can be assumed that these are Arab students who come to these cities to study at universities.