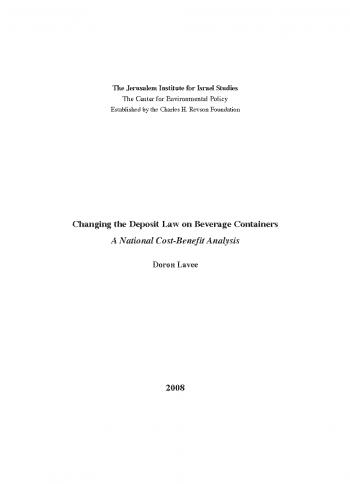 The Deposit Law on Beverage Containers 1999 came into effect on October 1, 2001. This work is intended to examine, from a wide perspective, the implementation of the law in light of its goals and to recommend further steps that should be taken in keeping with them.

1. The feasibility of expanding the law to include containers whose volume is equal to or greater than 1.5 liters; 2. Increasing market competition; 3. Increasing public involvement. The work revealed that from both economic and environmental perspectives, the law should be expanded to include large containers.

It is not possible to apply the law to only certain types of containers. Such a decision would result in discrimination against different types of containers for the same kind of drink and would encourage people to buy beverages in containers that do not require a deposit, thus producing the opposite of the desired effect.

The Deposit Law could cover only non-alcoholic beverage containers and beer containers (but not wine or other alcoholic beverages), excluding milk containers. In such a way most of the containers on which a deposit is not worthwhile would be removed from consideration, without leading to undesirable consumption changes that might occur if the law were implemented only on certain types of bottles – such as encouraging consumers to switch from a type of bottle that requires a deposit to a type that does not.