For the Sake of Zion I Shall Not Stand Still? Executive Summary

Main Publications For the Sake of Zion I Shall Not Stand Still? Executive Summary 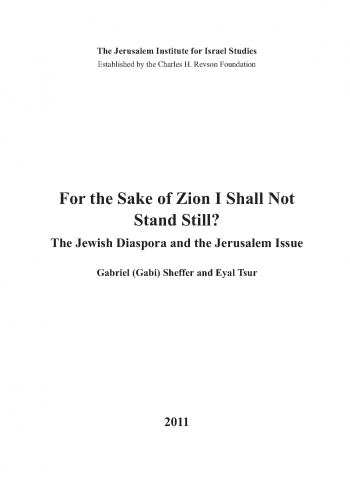 This is an abstract for a book that marks the first comprehensive research that focuses on the Jewish Diaspora’s relations with and positions concerning Jerusalem, Israel’s capital and the holiest city for most of the Jewish people. It examines both the opinions and the actions of Diaspora Jews vis-à-vis this city. This book also refers to the political developments that have occurred in Jerusalem in view of the various social and political processes that have occurred in the major Jewish diasporic communities. Moreover, this is the first work whose main focus is the Jewish Diaspora’s relations to and perspectives on contemporary Jerusalem.

The bond between the Jewish people all over the world and Jerusalem has, as we know, been maintained for thousands of years and has religious, national and cultural aspects. In the course of time, however, other religions and nations became connected to the city, which eventually became a source of inter-religious and international tension that reached its apex in recent decades. While addressing the historical dimension of the bond between the Jewish Diaspora and Jerusalem, this research explores this bond’s characteristics in very recent times – namely, from the time Israel and the Palestinians first met at the negotiations table two decades ago.

The political developments in the Palestinian arena that followed the signing of the first Oslo Accords in 1993 quickly drew the attention and involvement of Diaspora Jews. Some of them expressed profound concern about the potential implications for the future of Jerusalem, which is, of course, one of the main issues at the heart of the Israeli-Palestinian conflict. Over time, Jews living outside Israel have supported various prospective political settlements.

Some oppose the geopolitical division of Jerusalem; some view it with favor; others have presented no official position but at the same time promised to support any decision taken by present and future Israeli governments. Many Jewish organizations abroad urge the Israeli government to guarantee the unity of Jerusalem under its rule. More recently, Diaspora Jews have become active in promoting a political settlement of the Jerusalem problem. They lobby the Israeli government and/or host home governments, demonstrate in Israel and abroad, donate money to various political organizations in Israel, and engage in other such activities.

For the Sake of Zion I Shall Not Stand Still? Executive Summary