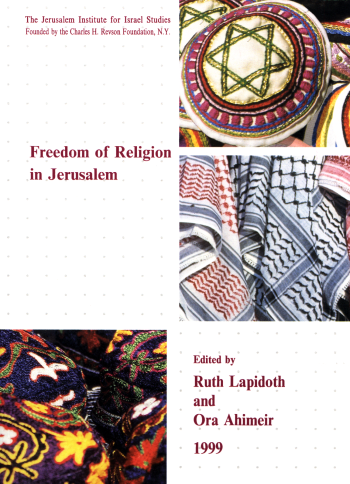 This paper examines the various aspects and principles of freedom of religion and conscience in Israel, as well as their implementation and limitations. There is analysis of the next aspects: the status of the holy places, equality of rights for members of different religions, the right to change one’s religion, regulation of proselytizing activities, the right to a religious education, matters of personal status, and the status of people who do not belong to any religious group.

Religion in the Holy City

Religion has always had considerable influence upon humanity as a whole, as well as upon the lives of different peoples and individuals. Religion has given human beings hope and happiness, but in its name and for its sake many atrocities have been committed. Throughout history, competition among different religions has caused terrible suffering.

No wonder then that Jerusalem, which is sacred to three religions, has been time and again an arena for religious struggles. Competition among the various communities for whom it is holy has caused suffering, ruination of sacred sites and symbols and sometimes destruction of the city. This is the reason we chose to dedicate this publication to the examination of issues related to freedom of religion in this city.