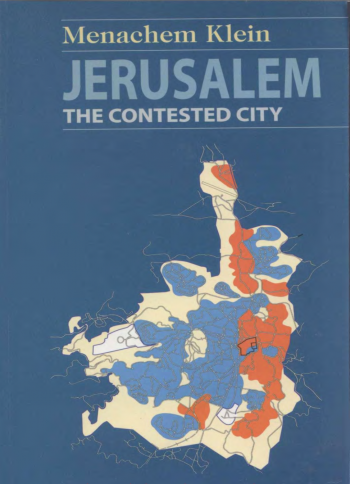 The book’s subject is how the Israelis and Palestinians in Jerusalem have moved closer to each other despite their differences. It chronicles the attempts that have been made since 1977 to resolve the conflict and find a solution that will enable the communities to live together. Even though each side to these negotiations has declared that Jerusalem cannot be bargained for or be the subject of compromise, agreements have been made and understandings have been reached. The search for a political arrangement acceptable to all parties to the conflict is a new experience, coming after long years of fanning the flames of hostility in the city. This book follows these attempts.

The Roots of the Conflict in Jerusalem

Jerusalem is hardly just another city and is far from being a local urban phenomenon. Nor is it just one more national capital. It is also more than just the most political city in Israel and the West Bank. The cliche is that Jerusalem is a mosaic of sparkling gemstones, a splendid city whose inhabitants live side by side in harmony.

The reality, as everyone knows, is far less idyllic. All the fault lines that cut through Israeli society intersect in Jerusalem, and as if that were not enough, the city lies on the front line of the conflict between Israel and the Palestinians. It is the capital of Israel, but East Jerusalem is the future Palestinian state’s capital in-the-making. Most Palestinians feel a personal relationship with Jerusalem even if they have not visited it for years. This is much the same as Jews feel about the city. Quoting the Jewish poet Zelda, Meron Benvenisti called the city “a place of fire”.

The front lines in Jerusalem are not only national and ethnic. The city’s holiness to Jews, Muslims, and Christians adds a religious dimension to its tangle o f conflicting and contradictory identities, making the city a focus of worldwide interest. The city’s holiness to the monotheistic religions is often inseparable from its national sanctity, and these two forms o f the sacred feed each other’s flames. Jerusalem is also saturated with historical memories, with existential anxieties and Utopian hopes, all bubbling together in a steaming stewpot.

Jerusalem is a frontier city, even though it has not been thought of as such since 1967. The physical barrier, the fence that divided Israeli and Jordanian Jerusalem over which Israeli and Jordanian army outposts faced each other, no longer exists. But the city’s national and ethnic barriers have remained in place, and have become even more impervious since 1967. The confrontation, which was intercommunal between 1917 and 1948, became international between 1948 and 1967. During these years Jerusalem was a frontier city divided between two countries. In many ways, the confrontation between Israel and the Palestinians has returned since 1967 to its previous intercommunal form.

Since Israel annexed East Jerusalem, the city has had two ethnicnational groups ranged against each other without any physical barrier separating them. As a frontier city, Jerusalem was, and to a large extent still is, a locus of competition for control of the city, with each group being unwilling to accept the governance of the other. The opposite side is a rival, not a partner. The Palestinian Authority’s partial penetration ofjerusalem since September 1993 has inserted a dimension of statehood into East Jerusalem. Unlike the chaotic nature of intercommunal relations, relations between countries have a more institutionalized and ordered character. It is much easier to locate and manage conflicts between states than between communities. The resolution of the confrontation between Israel and the Palestinians, and its stabilization, requires institutionalization, and institutionalization cannot be built without political foundations.