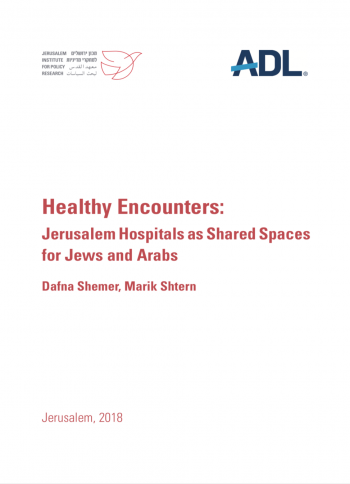 This paper addresses hospitals in Jerusalem, Israel’s most diverse and culturally multifaceted city, as a shared space for Jews and Arabs. The paper will present relevant studies in this field, with attention to reciprocal relations within the shared space. Most of us encounter hospitals when we are in a state of vulnerability – either as patients or as relatives of patients. Moreover, the hospital setting itself entails an encounter with Israeli society in all its diversity.

Throughout Israel, and in Jerusalem in particular, Jews and Arabs, secular, religious, and Haredi (ultra-Orthodox) patients and healthcare providers lie in hospital beds or work side by side in such a way that the familiar balance of power is often transposed. This creates a shared space, and although most of its occupants did not arrive by choice, it has tremendous potential – for both negative frictions and positive encounters.

The Arab community accounts for 21% of Israel’s total population (Central Bureau of Statistics (CBS), 2018). Relations between Arab residents and the Jewish majority are characterized by socio-economic gaps, physical and geographical separation, and national and political confrontations stemming from their minority status. Another segregated population group is the Haredi community, which accounts for 12% of the total population (Malach, Choshen & Kahaner, 2018). Although Haredim constitute a portion of the Jewish majority, most reside in separate cities and neighborhoods and maintain a culturally insular lifestyle. These two minority population groups have high fertility rates, and their relative proportion of the total population is expected to continue increasing. In the past decade there have emerged a range of public spaces and commercial spheres in which members of these communities encounter the majority population.

Jerusalem is Israel’s most populous city, with nearly 900,000 residents, 38% of whom are Arab. Among the Jewish population, about 40% are Haredim (approximately a quarter of the city’s total population). The city’s large and diverse population make it a “crystal ball” of sorts in the sense that it experiences certain trends before they affect Israel as a whole. There is constant tension between non-Haredi and Haredi Jews, which manifests in struggles over the character of public spaces and residential neighborhoods. The deepest and most significant divide, however, is between the Jewish population as a whole and the Arab population, most of whom reside in East Jerusalem.

Like other shared spaces in Israel, hospitals are by necessity a shared space. The study finds, however, that hospitals in Israel generally and in Jerusalem specifically, excluding those that serve only the Arab population, constitute a shared space with the potential for positive encounters as well as negative friction. Two types of interaction – between colleagues on the medical staff and between Arab patients and Jewish healthcare providers – generally entail a productive and positive encounter, while most of the reported confrontations or objections to integration relate to the two other types: encounters between Jewish patients and Arab healthcare providers, and encounters between patients from the two population groups. This hypothesis requires further in-depth research for the sake of validation and substantiation.