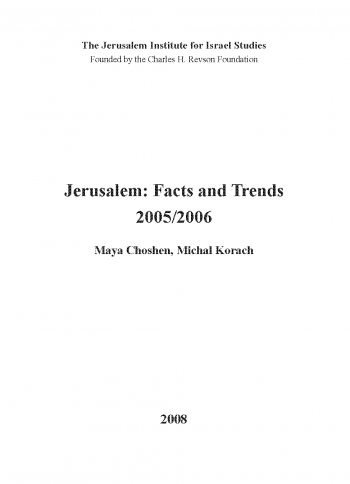 Jerusalem: Facts and Trends is one of the Institute’s premier publications. It is an accessible guide through which anyone from a variety of fields can find useful information on Jerusalem.

The publication analyzes the complex reality that is ‘modern Jerusalem’ and examines the area, the diverse populations that inhabit the city, employment, education, construction and tourism. The data used in the publication is largely drawn from the Institute’s Statistical Yearbook of Jerusalem, published annually.

Jerusalem’s educational system is the largest, most heterogeneous, and most complex in Israel. This system must provide solutions for a variety of populations with different needs. There are four major types of schools: state schools, state-religious schools, ultra-Orthodox schools (which since 1993 are run by a separate department within the municipality) and Arab schools. The Ultra-Orthodox schools are divided between talmudei torah and independent schools, which are also divided up among different hatzerot and communities. Arab schools are divided between municipal schools and non-municipal ones; the latter includes religious schools belonging either to churches or to the Muslim waqf (religious authorities) or to other private bodies. In most of the Arab schools boys and girls are separated.

In 2005 there were 146,451 motorized vehicles registered in Jerusalem, 77% of which were private cars. In Tel Aviv, by comparison, there were 220,739 registered motorized vehicles (most of the country’s company vehicles are listed in Tel Aviv), 70% of which were private cars. In 2005 the level of motorization (number of vehicles per 1,000 residents) in Jerusalem was 203. The level of motorization of private vehicles in Jerusalem stood at 157, compared with 182 nationwide, 409 in Tel Aviv and 286 in Haifa.