Migration to and from Jerusalem 2017

Main Publications Migration to and from Jerusalem 2017 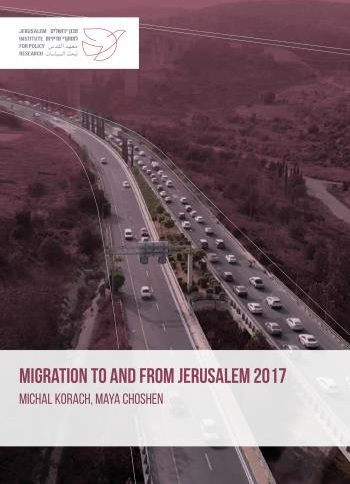 The current study examines the scope of the migration to and from Jerusalem as well as the characteristics of the migrants in 2017, based on data from the Israel Central Bureau of Statistics. The migration balance for that year was -6,000, and was significantly low in comparison with previous years, and the lowest figure recorded  since 2008. The research findings are intended to assist decision makers and policy makers responsible for developing and strengthening the city.

In 2017, 11,100 new residents moved to Jerusalem from other localities in Israel. This number was the  highest since 2010, when a similar number immigrated. In 2016, 9,700 new residents relocated to  Jerusalem.
The largest number of newcomers to the city (40%) originated in areas surrounding Jerusalem (Judea and  Samaria and the Jerusalem District), with 34% from areas surrounding Tel Aviv (Tel Aviv District and the  Central District). Most migrants to Jerusalem came from the following localities: Bnei Brak (690), Beit  Shemesh (670), Tel Aviv (610), Ma’aleh Adumim (400) and Beitar Illit (370). These localities are diverse in  character and include secular, religious and ultra-orthodox Israelis. Almost half (47%) of the migrants to the city were young (20-34 years old). Children and young adults comprised the main age groups: 25-29  (19%), 20-24 (17%), 0-4 (13%) and 30-34 (11%). Those migrating to Jerusalem from ultra-orthodox  localities, or from localities with a large ultra-orthodox population, were mainly families with children.  Among the migrants from Tel Aviv, Haifa and Be’er Sheva, the percentage of young people (aged 20-34)  was very high (52%-57%). A significant number of these young people moved to the city for higher
education.

This research is part of a series of studies conducted by the Jerusalem Institute for Policy Research for the Ministry of Jerusalem and Heritage, as part of the Jerusalem “Jubilee” Program for the Economic Development of Jerusalem. The first migration study in this program was conducted in 2012 and has been updated every year  since. The current study relates to 2017.

Urban Sustainability - Summary of Stage One