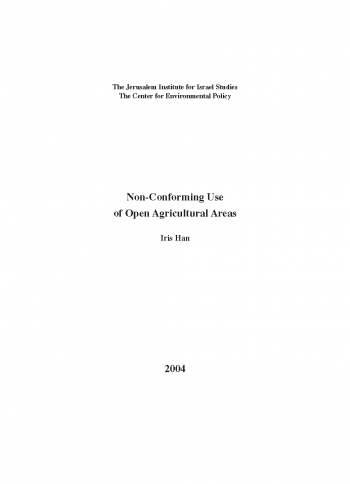 Use of agricultural land for business and commercial purposes become a widespread phenomenon. It is reshaping the agricultural landscape and the country’s open areas, and is creating a reality with grave implications, especially in the Central District.

The purpose of this study is to examine the issue of non-conforming use as a tool to facilitate the rezoning of agricultural land or its use for non-agricultural purposes. The hypothesis being tested is that the flexibility permitted by law in respect of non-conforming use has been abused, and, together with illegal building, it has created a reality with widespread and grave implications.

The Grave Implications of Illegal Building

The phenomenon of illegal building and non-conforming use of open areas also has weighty implications from environmental, social and planning aspects. This phenomenon is utterly opposed to the guiding principles of Israel’s national planning, as expressed in the national and regional master plans, and it constitutes a real threat to the contiguity of the remaining open areas in the Central District. The proliferation of development hubs and their distribution across the area, together with their attendant infrastructures, leaves only small and disjoined patches of open area, with very little value in respect of landscape, ecology and recreation.

Non-conforming uses have negative implications in the environmental-quality field: lack of sewage solutions, hazards stemming from unregulated storage of dangerous substances, and so forth. Proliferation of non-conforming use also causes a decline in the image of localities and community conflicts, as well as adversely affecting agricultural soil and the possibilities for assigning it to its stated purpose. The enormous scope of this phenomenon, which contravenes an inadequately enforced law, also has a grave significance in respect of values, as it encourages offenses and contempt for the law. The continuation of this phenomenon permits an illegal reality, with all its negative implications, to dictate long-range planning.

When faced with a decision whether it would be proper to permit nonconforming use or to change the plan, the courts usually hewed to a restrictive and scrupulous line, emphasizing that non-conforming use may be licensed only under extraordinary and special circumstances. In several cases, the courts even criticized the tendency of a local planning and building committee toward laxity in issuing permits for non-conforming use, and the way in which the committee ignored its duty to enforce the law and prevent illegal building. In recent years, proposals have been tabled in the Knesset to amend the Planning and Building Law in order to facilitate obtaining a permit for non-conforming use of agricultural land.