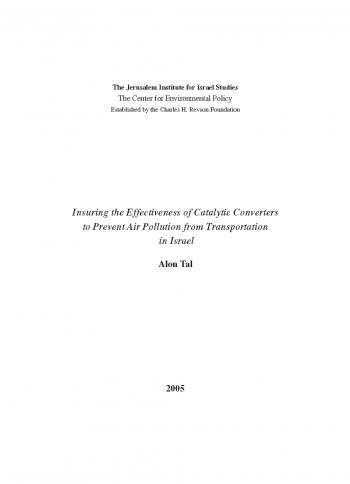 Since the mid-1970s, Catalytic Converters have become conventional technology to reduce air pollution from vehicles.

This study examines the physical properties of catalytic converters and the causes of shortening their lives. It also discusses Israeli and global policy on government intervention to improve the situation and addressing various aspects of defective performance of catalytic converters in older vehicles. The last part of the study maps the areas where policy recommendations are required.

The pollution profile among Israeli vehicles is no different than that of other industrialized countries. Older vehicles (especially diesels) contribute an inordinate percentage of the pollution burden. With full introduction of catalytic converters into the Israeli fleet reaching its tenth anniversary, it is time that the country began to consider converter longevity and replacement in its overall air quality strategy.

In theory, the country’s current programs and policies offer a strong regulatory infrastructure for implementing such a policy. For instance, the annual vehicle registration test is professionally implemented with oversight improving, standards for replacement converters are in place, etc. Yet, this potential goes unexploited, for a variety of reasons. Chief among them is a poor diagnostic standard in annual testing for evaluating catalytic converter performance and the insufficient frequency of testing among older vehicles. A new emissions standard is critical as a basis for identifying damaged converters, prohibiting “tampering” with converters and for better directing garages to make real repairs on polluting vehicles.

While today’s fuel standards, especially sulfur concentrations and lead, are at long last adequate for meeting the present generation’s needs of emission control equipment, further reductions will be necessary. Presumably, the current linkage to Europe’s fuel standards, if honored, will be sufficient for the future. Retrofitting of older fleets, especially particulate traps among diesel vehicles, appears to be a cost-effective initiative. The government should identify high-polluting groups and assess the potential for cost-sharing initiatives. Already, the present analysis suggests that an accelerated vehicle retirement program would reduce emissions sufficiently to justify the cost of a tax reduction or other form of incentive.