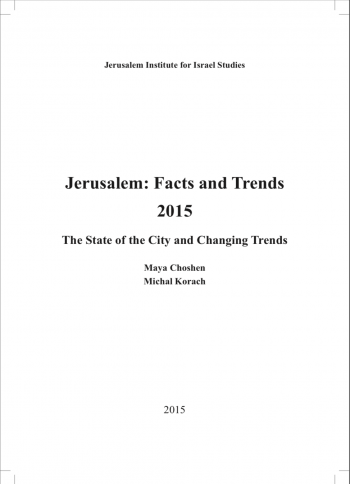 “Jerusalem Facts and Trends” is one of the Institute’s premier publications. It is an accessible guide through which anyone from a variety of fields can find useful information on Jerusalem.

The publication analyzes the complex reality that is ‘modern Jerusalem’ and examines the area, the diverse populations that inhabit the city, sources of population growth, welfare and standard of living, employment, business and industry, education, housing and tourism. The data used in the publication is largely drawn from the Institute’s Statistical Yearbook of Jerusalem, published annually.

The unique cultural and religious character of Jerusalem; its status as the capital of Israel, the center of Jewish life, and a holy city for the three monotheistic religions; and its wealth of religious, historical, and archeological sites as well as cultural centers – these factors combine to make it a powerful magnet city for visitors from all over Israel and the world. Jerusalem is a global tourist destination, and in 2014 it recorded 2,982,000 overnight hotel stays by tourists, constituting 32% of the total overnight hotel stays by tourists in Israel.