The Israeli-Palestinian Violent Confrontation, 2000-2004 – From Conflict Resolution to Conflict Management 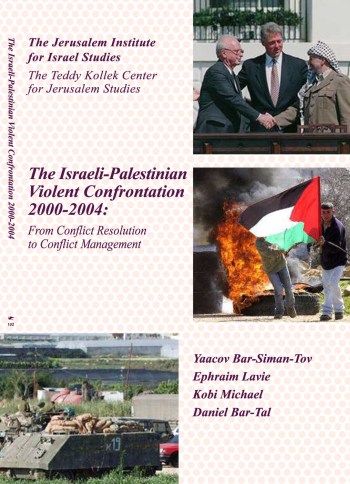 The violent confrontation which erupted between Israel and the Palestinians in September 2000 developed into a continuing low-intensity conflict. The goal of this work is to propose a conceptual framework which offers conflict-management alternatives of a more controlled character, thus facilitating the transition from management to resolution.

The present paper analyzes two aspects: The Israeli conception and basic assumptions of the Oslo process and of the Israeli Palestinian confrontation (from September 2000). The paper considers the sources and validity of these assumptions, describes the patterns of activity that stemmed from the conception, and addresses the implications of the actions taken for both sides.

Reimagining Solutions to the Israeli-Palestinian Conflict

The Institute’s researchers felt that both the Israeli conception of managing the conflict and the strategies that were adopted in the past four years were inadequate. The high casualty rate and the economic and political price paid by Israel constitute an enormous sacrifice, and in addition our moral principles are constantly being tested as never before. Manifestly, a new and more creative way of thinking about this confrontation is urgently needed.

Four initial insights concerning the outcome of the conflict have emerged from statements made by the political and military levels and from the public and media discourse in Israel:

1. The Israeli-Palestinian conflict is not conducive to a military solution.

2. Management of the conflict has played itself out in the present format and cannot end the confrontation or moderate it substantially.

3. The sides are not yet ripe to resolve the conflict, only to manage it by means of limited or partial political arrangements aimed at reducing its intensity and diminishing its damage. However, even here third-party assistance will likely be needed, owing to the residual hostility and mutual mistrust.

4. As long as Israel believes that it has “no partner” on the Palestinian side for a political and security dialogue, it will pursue (in coordination with the United States) a unilateral management strategy to enhance its security, by means such as the separation fence and the disengagement plan.

In September 2003, as part of its effort to develop new conceptual modalities, the Jerusalem Institute for Israel Studies initiated the creation of a “think group” to analyze the situation in the Israeli-Palestinian conflict. The group reexamined the underlying assumptions and the strategies of managing the confrontation and set out to formulate principles for alternative conflict-management strategies, consistent with the evolving risks and opportunities.