Main Publications A Vision for Jerusalem: Plan for Revitalizing Jerusalem, the Caital of Israel: Manager’s Brief 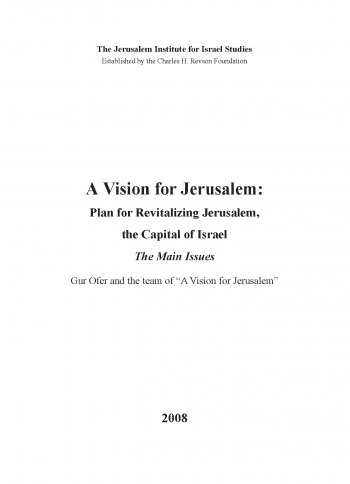 A careful analysis of trends over the last decade shows that the increase in the proportion of the Palestinian population contributed only about 10 percent to the deterioration of income and rise in poverty in Jerusalem; If current demographic, work habits and migration trends continue, by 2020 the Haredi population will become a majority of the Jewish population and the present bad economic trends will only accelerate. “A Vision for Jerusalem” is the name of a plan for the revitalizing and rejuvenation of Jerusalem which tries to create non-Haredi Jewish immigration to the city. The initiative for the plan came from a group of funds active in Jerusalem, and the work was undertaken by an independent group of researchers relying on the ideas and extensive efforts invested in the plans for renewal in the city, such as the new master plans prepared for the city and the region, the work of the coalition for a Sustainable Jerusalem, and more.

Jerusalem, the capital of Israel and of the Jewish people, encompasses within its borders precious assets and sites of world heritage, including historical, cultural and religious places holy to Jews, Christians, and Muslims. The Hebrew University and other major medical centers have created an agglomeration of top institutions of higher education, scientific research, and learning in all fields. The concentration of most government bodies of Israel and of the Jewish people adds to the centrality and economic status of the city. Yet despite all this, we have been witness to a process of serious deterioration in the social and economic standing of Jerusalem, and with them its image and status.

In recent years Jerusalem has been ranked among the cities of Israel with the lowest level of income per capita.

Having been almost equal to Tel Aviv back in 1980, it is now down to 60 percent of Tel Aviv’s level. According to a socioeconomic index compiled by the Central Bureau of Statistics, since 1995 Jerusalem deteriorated from the 59th to 111th place among towns in Israel leaving above it former development towns like Dimona and Beit Shean. Over the last three decades the flow out of the city of young and financially sound populations has grown and the number of new immigrants choosing to settle in Jerusalem has dwindled. This publication is the first chapter of a wider study of an independent working group on ways to rejuvenate Jerusalem. The chapter includes a summary of findings, a discussion of the main issues, and recommendations. The full study, includes seven additional chapters that deal in detail with various aspects of the program.

The poverty of the population results in a poor city and municipality, hence low tax revenue, poor services and an eroded economic base; these, in turn, bring about a chain reaction that includes the departure of families with higher income and socioeconomic status — as well as a concomitant high tax burden – out to surrounding metropolitan areas or even further away.

In light of the aforementioned, immediate and intensive effort is required to halt and reverse the declining trends; otherwise Jerusalem will continue to sink into poverty and its status as the capital of Israel and of the Jewish people will be threatened.

The Development of Israeli Jerusalem

“A Vision for Jerusalem” assumes, realistically or not, that the development of most of the parts of the city inhabited by Palestinians will eventually be undertaken by a Palestinian entity, and the work devotes a chapter to such an eventuality. This approach allows the group involved to concentrate on what is realistically doable in the Jewish parts of the city, and is also based on the assumption that only a significant improvement in the security and political situation surrounding Jerusalem can make the project feasible and realistic.