Patterns in the Utilization of Constructed Land in Israel: Manager's Brief

Main Publications Patterns in the Utilization of Constructed Land in Israel: Manager’s Brief 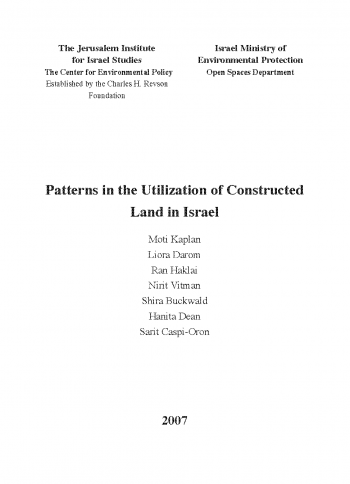 The major issue with which national planning has been trying to cope for the last decade is the demand for building and development, which has come in response to the increase in population and the rise in housing standards. The results of this demand include urban sprawl, extending outward from the cities into open spaces, the building of suburbs, and increasing population dispersal.

This research has two main goals: The creation of a database that reflects the extent of built area in Israel, its distribution, the patterns of its usage, and the ways it is utilized. And the comparison of a mapping of built-up areas and a data base updated to 2003 with a map and a data base that was created and processed by the same methodology in 1998.

This project tries to solve the problem of the lack of a single set of data, organized and open to criticism, set in a single point of time and used as a starting point for the coming years. The data base that this project has created is intended to be used as an agreed-upon base on a national level.

These data bases include land elements – its extent, uses, national distribution, and its municipal status – as well as the element of population, its size and characteristics. The inclusion of these statistics and their processing make it possible to learn about how the land is currently used and how it can be taken advantage of in the future.

The real success of this research will be found in its implementation and its use. We hope that master plans at all levels will take advantage of this work and that the database itself will be updated periodically.