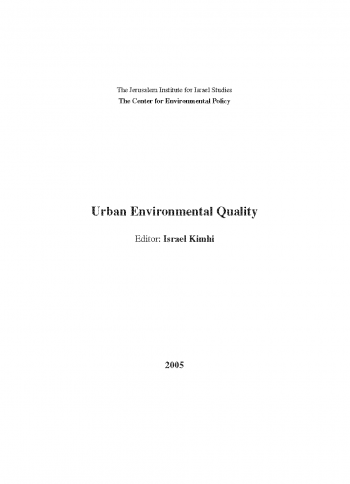 In order to address the question of how we can increase residential densities in Israel’s cities while still maintaining their quality of life, the Jerusalem Institute for Israel Studies convened a special task team.

The goal of this team is two-fold: first, to promote awareness of the importance and centrality of questions concerning intra-urban quality of life and second, to propose practical measures for improving urban environmental quality, even during the process of increasing urban densities, and to encourage a comprehensive and multi-systemic perspective towards environmental issues in the city. The team’s findings are shown in this book.

The State of Israel is one of the most urbanized and densely built countries in the world. More than 90% of its residents live in urban localities.

Nonetheless, spreading construction, both urban and rural, coupled with projections for continued rapid population growth relative to any other Western nation, raise the fear that Israel will run out of open spaces, particularly in the country’s center. Therefore, Israel’s planning policy has changed substantially in the last decade. Instead of encouraging the population to spread out in open spaces, it has set as a principal national objective the concentration of future development in or adjacent to existing built-up areas, particularly in the cities.

Although it could be argued that the process of densifying urban areas is helpful in preserving the open spaces outside the metropolitan areas, it is liable, at the same time, to exacerbate the damage within the cities. As a result of built densities, hazards such as noise and air pollution are likely to increase, since many of these problems are caused by transportation. Higher urban densities are also liable to damage open spaces within the cities, as well as the quality of life in over-crowded residential neighborhoods.

The Problem of Intensifying Densities

In the event that the urban quality of life does, indeed, deteriorate because of the process of intensifying densities, the attractiveness of the suburbs and pressure on the population to leave the cities will rise. Thus, if we truly wish to avoid the continued process of suburbanization and damage to the open space outside the cities, we must ensure that higher densities are effected in such a way that does not jeopardize urban quality of life. Moreover, the success of any efforts to achieve higher urban densities depends, to a large extent, on improving the quality of life in the cities, among other things, by improving the environment within these centers.