Main Publications The Evaluation of Cooperation Between Palestinian and Israeli NGOS: An Assessment 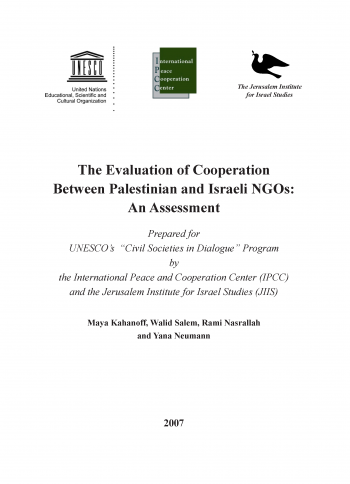 The main aim of this study—a meta-analysis of evaluations available in this field—is to identify successes, challenges, and lessons learned regarding joint ventures so as to inform the Social and Human Sciences (SHS) section of UNESCO and its partners about the key components that should be integrated in the “civil societies in dialogue” methodology.

Our declared mission was two fold: to summarize lessons learnt from Palestinian-Israeli cooperation, and to recommend guidelines for future cooperation endeavors. Specifically we were asked to review evaluations that had been conducted on various cooperation projects, a difficult mission in light of the scarcity of evaluation in this field; due to this scarcity, a third goal was defined – that of shedding light on the state of evaluation and suggesting principle guidelines for future evaluations in this field.

An Evaluation of Cooperation Projects

The research was carried out in two stages. In the first stage two separate but parallel studies were undertaken: one was conducted by an Israeli team at the Jerusalem Institute for Israel Studies (JIIS), while the other was carried out by the International Peace and Cooperation Center (IPCC), run by a Palestinian team. In the second stage the two teams worked together, and on the basis of the two initial documents produced a third, joint report presenting their combined conclusions. In addition, a workshop was held at which the joint report was discussed in a forum composed of representatives of various NGOs, researchers, and evaluators: the proceedings of the workshop, including the comments and contributions of the workshop participants on the subject, were recorded and also written up as a separate document.

Since formal and systematic evaluations were scarce, we conducted a number of interviews with central figures in various NGOs in order to informally 16 gather their insights and impressionistic evaluations, thus thickening our data and getting a fuller picture. Ten Israeli organizations and eleven Palestinian organizations, representing different forms of action (dialogue, peace building, advocacy, reconciliation, etc.) were chosen. In addition four international funding organizations were selected for in-depth study of their perceptions and experience with Palestinian-Israeli cooperation.