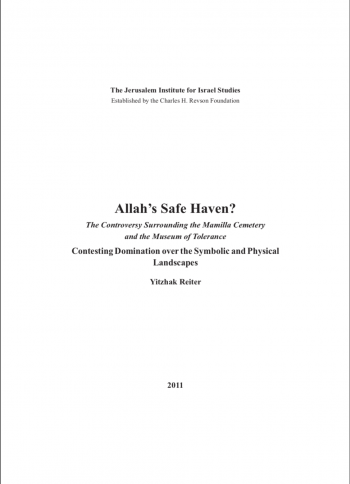 This book discusses the controversy of the construction of the Museum of Tolerance in Mamilla, on a plot that in the past it had been a Muslim cemetery. This conflict reflects a clash between human dignity (respect for the deceased) and the urban development of interest of modern societies. It also reflects a conflict between the needs of the Jewish State and the sensitivities of the Muslim- Arab minority, with its needs for symbols of identity in the local and national landscapes. The main issues addressed in this book are addressed at three levels: the individual case of a conflict over the location of the Museum, the political level in the context of majority-minority relations and the universal level of objectivity versus ideological and political positions. The case of Mamilla offers a number of political lessons regarding the eruption of conflict following development projects on plots of land within historical cemeteries in Israel.

Three elements that distinguish the conflict

Mamilla involves an initiative that is intended to symbolize tolerance.  By reaching the conflict reaching the court, there is now a shadow over the initiative and its goal.  The cemetery in question is large, historical, important, and situated in a city of religious importance for the three monotheistic religions.  There are a substantial number of graves discovered in Mamilla.  These elements have been raised by opponents of the construction at the site of Mamilla. Initiators and supporters of the museum’s construction have countered with the following claims: the Muslim community neglected the place over the course of many years; the Islamic movement led an ideologically charged struggle for identity against the state and the symbolic landscape of Jerusalem.

Every plot of land that was of past importance for the religious and cultural heritage of a minority community, or a burial site, could serve as a source of conflict if its designated purpose is changed.  Activities that were characteristic of government authorities in the early days of the state cannot take place today without incurring a heavy price both nationally and internationally. Downplaying or concealing the heritage of property intended for construction from the eyes of the public is usually not effective and will likely be exposed, leading to more aggressive measures on the part of the opposing side.

The activities of Jewish bodies and of the State of Israel to preserve Jewish cemeteries in Europe as well as heritage sites and Jewish cemeteries in other countries could be negatively impacted as a result of the damage done to historical cemeteries in Israel.  The courts are not the appropriate venue for addressing conflicts over construction in cemeteries because a judicial decision is only a locally applicable determination that does not resolve the conflict.