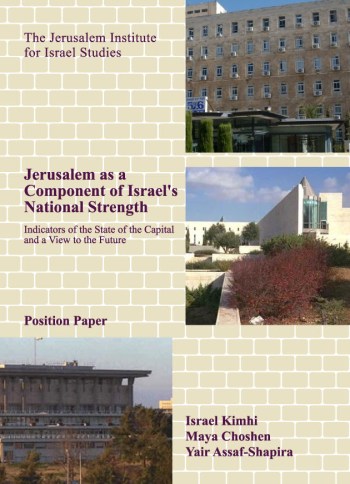 This research aimed at delineating the image that the general Israeli public has of Jerusalem on a variety of issues, and its opinions regarding the city’s future. The Institute intends to repeat the survey periodically, in order to monitor changes in public opinion and in Israeli positions regarding Jerusalem.

However, in contrast to the public’s sentiments regarding Jerusalem, recent years have witnessed the intensification of processes which threaten to impair the city’s resilience, and there is real reason to fear for Jerusalem’s ability to weather the difficulties facing it.

The Jerusalem Institute for Israel Studies has been monitoring the state of the city, and the processes that have accompanied its development, for many years. The Institute proposes that efforts to investigate changes in Jerusalem’s status over time be institutionalized, and that processes taking place in the city continue to be monitored.