Main Publications The Security Fence Around Jerusalem: Implications for the City and its Residents 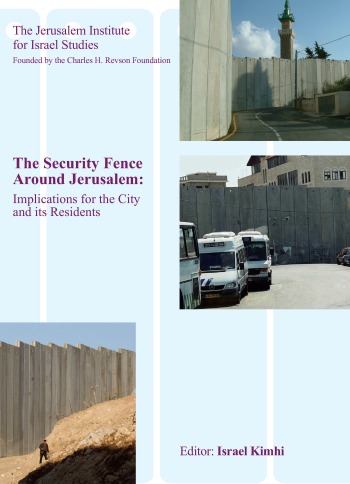 The articles in this collection address a number of issues connected with the security fence in the Jerusalem region.

The first article addresses the fence’s impact on the living conditions of East Jerusalem Arabs and its economic and social implications for the city’s entire population.

The second article analyzes the changes in the pattern of life experienced by families in Palestinian villages which border the separation fence but which are located outside the Municipal boundaries of Jerusalem.

The third article examines the way in which the fence affects the functioning of the Christian institutions located in proximity to it, and deals with the issue of how the Christian world, with all its diverse elements, regards the new reality created by the fence.

The last article presents various alternatives to the route of the fence that is being built around Jerusalem, based on the assumption that the current rendering is not the final word and that one day a decision will be made to alter its route, due to local urban reasons or as a result of negotiations with the Palestinians on the future of Jerusalem.

The problems currently being created by the security fence and those likely to develop in the future, vacillation over the issue of expansion to the east, and the question raised by many regarding the logic, from Israel’s point of view, of bringing another approximately 200,000 Palestinians into Israel’s capital — all of these issues will eventually necessitate reconsideration of the borders and the geopolitical arrangements prevailing in the Jerusalem area, and in this context alternatives to the fence route will also be required. The Israeli government’s declarations that the fence should not be regarded as a political border and that it is meant to address security concerns only, provides another reason to examine possible alternative routes for it, based on the guiding principles of various future arrangements.

The alternatives that have been considered and sketched are by their very nature extreme ones; their intention was to add an additional conceptual dimension to the subject.

One alternative seeks to create separation based on the demographic distribution of Jews and Arabs in the area — in other words, dividing up the city according to the residential and functional areas of each of the populations (as a continuation of the Clinton plan).

Another alternative, similar to the plan being carried out today, proposes minor amendments and changes to the existing route.

A third alternative examines the possibility of including a greater number of Arab localities within Israeli Jerusalem, in order to mitigate the disruption of fabric of life suffered by the Palestinian residents. This alternative greatly increases the city’s Palestinian population.

The fourth alternative presents a security fence which encompasses a larger metropolitan area, including Jerusalem and the Jewish and Arab localities that surround it, and which creates a new administrative entity in the Jerusalem area (“Jerusalem, D.C.” — on the model of the U.S. capital of Washington, D.C.).

These alternatives are to a great degree theoretical, due to the fact that the security fence around Jerusalem is nearing completion. Nevertheless, they may serve as raw material for any reconsideration of the issue which may emerge from efforts to renew negotiations with the Palestinians.

On July 9, 2005 the Israeli government made the decision to complete the Jerusalem-area security fence by September 2005 and to make preparations by that date for a large number of accommodations (convenient transit points, hospital branches, post offices at the transit points, school busing, coordinating community administrations, etc.) aimed at minimizing the change in fabric of life to be suffered by those Palestinians who will be left outside the fence.

At the time of writing work on the Jerusalem fence has not yet been completed, and even if it had it is highly doubtful whether these recommendations would be capable of quelling international criticism and it is even more doubtful whether, even once the fence is completed, any new hospitals or sophisticated clinics, schools or other institutions, all of which cost a great deal of money to build, will be constructed. It is more reasonable to suppose that we are currently at the threshold of a new era, one in which the conditions created by the Jerusalem security fence will be liable to increase Palestinian residents’ animosity toward Israel and to strengthen their motivation to participate in hostile acts against Jews in Jerusalem and outside it.