The History of the Jerusalem Institute

How we began: “To modestly establish an institute dedicated to the study of Jerusalem”

At the end of the 1970’s, Mayor Teddy Kollek came up with the idea of founding a research institute that would study Jerusalem, one of the most complex and complicated cities in the world. The heads of the Hebrew University and the Jerusalem Foundation rose to the challenge and established the institute in 1978, with Prof. David Amiran as its director. Amiran, who founded the department of Geography at the Hebrew University, invited Ms. Ora Ahimeir to establish with him the body that was called at the time The Jerusalem Institute for Research.

In her article from 2003, “A Research Institute is Born”, Ahimeir concedes the following:

“In the beginning,  there were obvious characteristics of a startup to our actions: establishing an institute dedicated to the study of Jerusalem, a one-time grant from the German publishing mogul, Axel Springer, a willingness to make do with very little, a meager salary and two rooms, extremely modest—adopting furniture thrown away by the Hebrew University, an abundance of goodwill from public figures who were part of the founding team, and a great love of Jerusalem, which was the common denominator of all those who stood by the newborn. However, as is common for startups, it was unclear what was stronger: the push from those who had the idea or the pull of the market that needed such an institute.”

More About the Institute 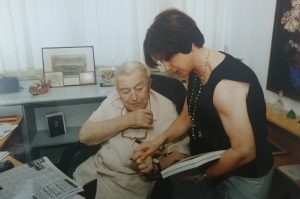 The Uniqueness of the Jerusalem Institute

Teddy Kollek’s dedication to Jerusalem, and his recognition of the city’s unique and complex problems, led him to the conclusion that Jerusalem needs an academic, professional research institute that will critique the establishment, suggest ideas and solutions, and create a database of knowledge about the city. The idea of specializing in Jerusalem and the conscious choice of the capital city as our “niche” was accepted by all. The unique mission of the Institute was summarized in a sentence that is appropriate for these days as well: “to create studies that are useful for the Jerusalem of today”.

A November 1978 news item, published in the Hebrew University bi-weekly, announced the foundation of the Institute, mentioned several fields of research, and research instruments that exist in the Institute to this day, including studies of the city’s economy, social conditions, demography and planning. The Jerusalem Statistical Yearbook is also mentioned as a “wealth of information” instrument that will provide “information and surveys of Jerusalem issues that are of interest to the citizens.” The importance of events that are open to the public as a way to disseminate professional and reliable knowledge about what is going on in Jerusalem was also mentioned.

Challenges in Establishing the Institute

In her article, Ahimeir states that:

“It was difficult to find researchers in academia who preferred policy research over historical or theoretical research. The academic rewards, we were told, were better for those who invested in theory or history. In time, researchers were found who were up to the challenge. In the tension between the demands of academia for thorough, in-depth studies and the needs of policymakers, policy issues overcame, in the end, the academic and theoretical issues. Focused policy researches, alongside more thorough, in-depth studies, became the mainstay of the Institute.”

The First Conference at the Jerusalem Institute

The first conference at the Jerusalem Institute dealt with a topic that has been a central issue throughout the years: planning the city center (see for example, Going Downtown: Jerusalem’s city center, history, current situation and the renewal plan/Amnon Ramon, Aviel Yelinek, Asaf Witman [Eds.] 2011; A Vision for Jerusalem: A plan for rehabilitating Jerusalem, the capital of Israel/ Gur Ofer [Ed.], 2009). Prof. David Amiran’s explanations ahead of the conference reveal the urban planning conceptions that were valid at the time and that resonate to this day: “In parts, the city center looks like a commercial district from a few centuries ago, yet on the other hand it is the capital city of Israel. Thus, Jaffa Street is an example of a problematic combination of modern buildings such as Clal Center or Beit Yoel [which nowadays are considered architectural failures] and ancient, unsophisticated buildings.” A future conference dealing with the issue of preservation in Jerusalem is also mentioned and presented as a ‘sensitive issue’ that requires “meticulous preparation of the neighborhood residents to ensure that they do not rise up against the rehabilitation plan.”

The Jerusalem Institute for Policy Research: Expansion of the Research Beyond Jerusalem

The original policy of the Institute to focus on the study of Jerusalem was put to the test in its third year, when in 1981 the New York-based Revson Foundation became its primary funder. The foundation conditioned its support on conducting research not only on Jerusalem but also on other issues concerning the entire country.

The Revson Foundation wished to encourage the establishment of a policy institute on the model of the famous American Brookings Institution and vetted several establishments in Israel for this purpose. It chose the youthful Jerusalem Institute as it found in it a potential for innovation and because it was impressed with the ability it displayed in its initial studies and activities. The support of the Revson Foundation ushered in a new era, as it provided the Institute with a basis for independent action, unaffiliated with the establishment. It enabled the Institute to take off and shape itself on its own terms. In these years the Institute published a wide range of documents, such as “Trends in Employment: The Ethnic Dimension” (Yakov Nahon, 1984); “Single-Parent Mothers: Support Systems and Personal Welfare” (Ruth Katz, 1986); Jerusalem – The Struggle Over the City Structure and its Appearance (David Kroyanker, 1988, with Zmora-Bitan Publishers); The Waqf in Jerusalem 1948-1990 (Yithak Rieter, 1991); Freedom of the Press in Israel: Ethics as Viewed by the Courts (Moshe Negbi, 1995), and dozens of other publications (browse the complete catalog here). The Revson Foundation was the primary funder of the Institute up to 2011, but additional funding has been provided by independent bodies and other foundations.

Following the reception of research grants and the establishment of specific cooperative ventures, the Jerusalem Institute has been operating from the mid-1990s through “research centers”, which are semi-separate, independent units. In 1999 the Institute opened the Teddy Kollek Center for Jerusalem Research, which coordinated the research on the city. At the same time, the Institute’s conference hall was inaugurated. In the year 2000, the Revson Foundation funded the establishment of a Center for Environmental Policy. This center aims to “improve the quality of public management concerning the environment, to examine the efficiency and effectiveness of the intervention measures available to the civil service, and to put environmental issues on the public agenda.”

The Center for Environmental Policy has published dozens of foundational papers, such as The Rehabilitation of Polluted Lands in Israel: Policy and Law, Or Karsin, 2005; The Struggle Against the Trans-Israel Highway, Michal Miezlish, 2005; Sustainability 2030; The Patterns of Usage of Built-Up Lands in Israel, Motti Kaplan (2008); Changing the Deposit Law for Beverage Bottles: A Cost-Benefit Analysis, Doron Lavie, 2008; Planning Metropolitan Recreation Areas and Parks, Iris Han, 2011.

In the beginning of the 2000s, after dealing intensively with Jerusalem’s place in the peace process, the emphasis shifted to issues concerning the management of the Israeli-Palestinian conflict in Jerusalem’s complex reality without an agreement, in the framework of “The Center for Conflict Management”. Research concentrated on the reasons for the conflict, the parties’ interests and goals, the unique nature of a low-intensity conflict, on the barriers and reasons for the failure of the peace process, and the examination of alternatives that could make the transition from conflict management to conflict resolution easier. Prominent publications include the following: The Israeli-Palestinian Conflict 2000-2004: The Shift from Conflict Resolution to Conflict Management (Yakov Bar-Siman Tov et al., 2005); The Arab League Initiative: Indeed a Historic Opportunity? (Kobi Michael, editor, 2007); Obstacles to Peace in the Israeli-Palestinian Conflict (Edited by Yakov Bar-Siman Tov, 2010).

In these years the Institute also operated a Center for Studies of Innovation and Economic Growth, which produced international projects under the auspices of the European Union, such as SPREE and Target, which dealt with strategies for decreasing the use of the Earth’s resources by shifting, for example, to a service-based economy as opposed to the current consumption economy. A center for the study of the ultra-Orthodox Society directed by the late Prof. Amiram Gonen also operated during this time, publishing the Journal for the Research of Ultra-Orthodox Society and also conducting roundtable meetings with researchers of ultra-Orthodox society, activists, and representatives of the authorities.

Based in part on the article “A Research Institute is Born” by Ora Ahimeir, the first director and founder of the Institute. The essay was published in the book How to Influence: Researchers and Policymakers by Avraham Friedman and Shlomo Hason (Editors), Jerusalem: the Jerusalem Institute, 2003.